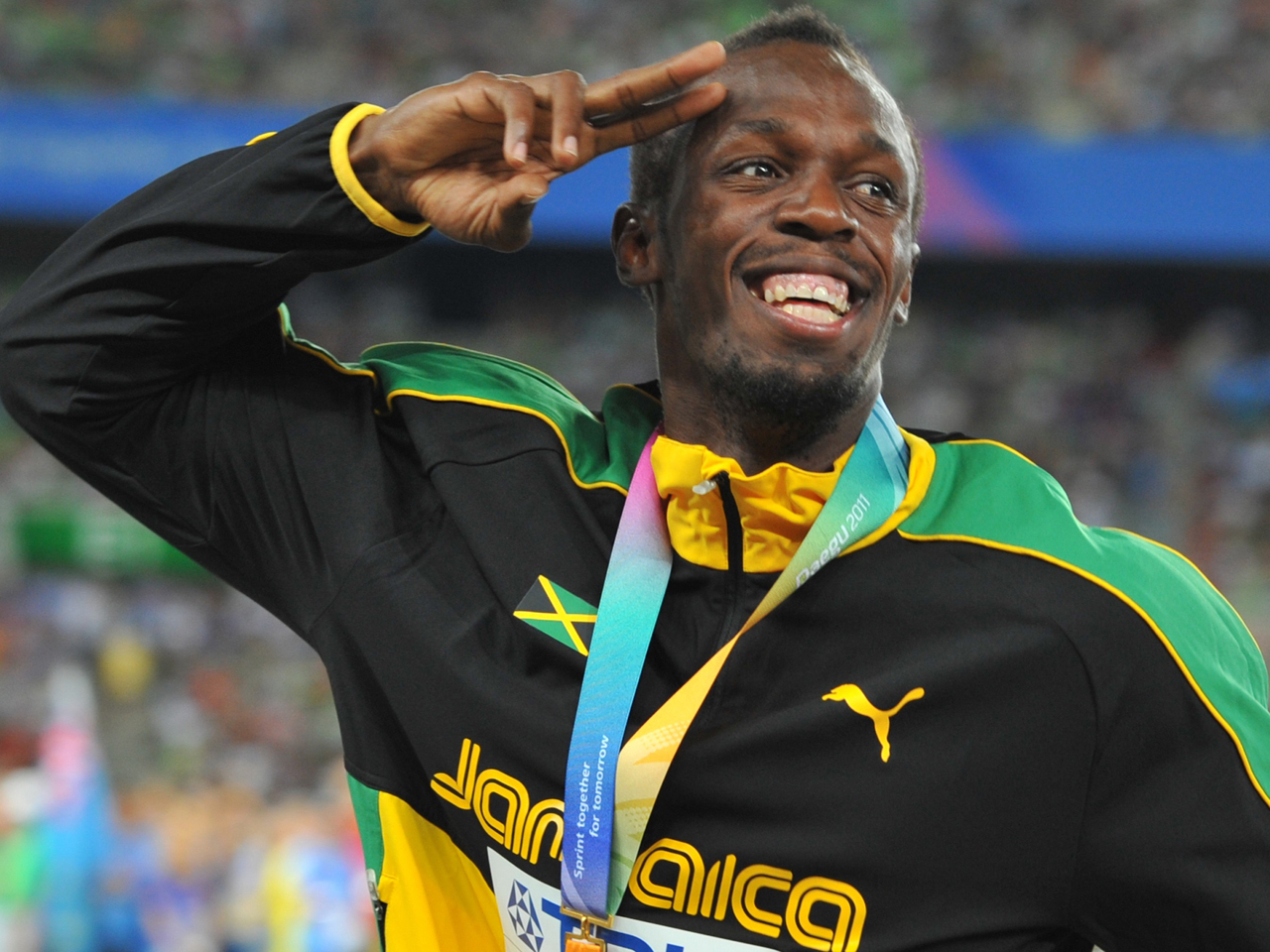 This is one of a weekly series of stories, called Road to the Olympics, that will focus on different aspects of the preparations for the Summer Games in London.

People around the world will watch as Olympians compete for bragging rights, records and medals in their respective sports when the London Games kick off in July.

We've compiled a list, in no particular order, of althetes to watch this year, representing different countries and excelling in various sports. Some names you'll already know. Others are new faces. But they all  are ones viewers should keep an eye on.

Keep clicking to see our 10 Olympians to watch.

Standing at 6'5" and weighing 207 pounds, the Jamaica-born Usain Bolt caught the world by storm after winning three gold medals at the 2008 Olympic Games in Beijing.

He became the first man in Olympic history to win both the 100-meter and 200-meter races in world record times.

Since the age 14, Bolt had been winning regional championships in western Jamaica, as well as national meets in the Caribbean. Ever since accomplishing those feats, Bolt, 25, has had his fair share of successes. In 2007, he broke Jamaica's 200-meter record of more than 30 years, held by the Donald Quarri.

Considered the "world's fastest man," Bolt is setting his sights on another Olympic win at the 2012 games in London.

Bolt is so serious about the upcoming competition that in May, he reportedly split from Slovakian fashion designer Lubica Slovak so he could concentrate on the games, reports the Jamaican Star and New York Post.

In March, he was photographed "racing" Prince Harry during the British royal's visit to Jamaica:

She set her first world record of 4.82 meters in Gateshead, England, in 2003. Women's pole vault became an Olympic event at the Sydney Games in 2000. Four years later, Isinbayeva went on to win an Olympic gold in Athens and then again in the Beijing 2008 games.

If she wins in London, Isinbayeva, 29, will become the first female track and field athlete to score gold at three consecutive Olympic Games.

She recently threw her support behind UNICEF, explaining on her website that she wanted to help out young people who aren't as fortunate as she has been.

"I am so happy to be back to competition and able to break new records. Like many of you I have been very saddened by tragic events affecting our youths recently, and they are very much in my mind when I train and throughout my day," she explained. "If I perform so well today it is due to a re-newed determination and energy, which come from the love and support from my parents, my friends, my coach and my fans."

Swimmer Michael Phelps came out of the 2008 Beijing Olympics holding the record for most gold medals at a single games with eight, breaking the record previously held by Mark Spitz at the 1972 Munich Olympics.

Phelps has a whopping 16 Olympic medals and is looking to walk away with some more this summer in London. He's also close to topping Russian gymnast Larisa Latynina, who won 19 Olympic medals, the most for any athlete in Olympic history.

What makes it even more intense it that Phelps, 26, has hinted it will be his final Olympic Games.

The American swimmer is known for his actions both in and out of the pool. He made headlines in 2008 after revealing he eats more than 12,000 calories a day while training and competing.

Later that year, Phelps was photographed smoking marijuana at a student party at the University of South Carolina.

''I engaged in behavior which was regrettable and demonstrated bad judgment,'' Phelps said at the time. ''I'm 23 years old and despite the successes I've had in the pool, I acted in a youthful and inappropriate way, not in a manner people have come to expect from me.

Katie Taylor has made boxing history time and time again in her native Ireland. Now she's going to put her skills to the test this summer when women's boxing makes its Olympic debut.

Taylor comes from a boxing family; her father was a light heavyweight champion boxer, and her mother is a boxing referee. She started her boxing career in 1998, quickly going on to become a three-time world and five-time European champion.

Taylor was invited by President Barack Obama to the White House in 2012. She also appeared in a clip with English rapper Tinie Tempah and Blink-182 drummer Travis Barker. See below:

Rafael Nadal is a name already on tennis fans' radars. The athlete, who hails from Spain, won a record six French Open titles, as well as 10 Grand Slam titles. The left-handed player also took home the gold medal in the 2008 Summer Olympics in Beijing.

Nadal started playing tennis when he was four years old with his uncle Toni Nadal, a former tennis player, who's also his longtime coach.

In 2011, Nadal, 25, received the Arthur Ashe Humanitarian of the Year honor for his contributions through the Rafael Nadal Foundation, dedicated to helping socially disadvantaged young people.

Olympic gold medal-winning track cyclist Chris Hoy will return to the Olympics this summer for another shot at the gold.

Born and raised in Edinburgh, Scotland, Hoy, 36, began competing in sports at the age of seven, starting out in crew and rugby. It wasn't until he was a high school senior that his love for track sprint cycling really took shape.

He won his first world medal in 1999 and went on to score his first Olympic gold in the 2004 Athens games. Four years later, he won the Olympic gold in three track sprint events: the keirin, sprint and team sprint. He's the first Briton since 1908 to walk away with three gold medals in a single Olympic Games.

Paralympian sprinter Oscar Pistorius was just named one of Time magazine's 100 most influential people in the world. The Johannesburg, South Africa, native is double-amputee sprinter. He was born without a fibula in each of his legs. Based on doctors' recommendations, his parents made the tough decision to amputate both of his legs below the knee.

Known as the "Blade Runner" and "the fastest man on no legs," Pistorius is the first-ever Paralympian to win gold in each of the 100-meter, 200-meter and 400-meter sprints (Beijing 2008). He's also the first amputee to win an able-bodied world track medal, after the South African 4x400 meter relay team took home silver in last year's World Championships.

According to Pistorius' website, "To be selected for the South African team to compete at the Olympic Games in London, Oscar must again run inside the 400m 'A' standard of 45.25 seconds between January and June 2012. Oscar will also be looking to represent South Africa in the Paralympic Games to defend his T44 100m, 200m and 400m titles."

Ethiopian long-distance runner Kenenisa Bekele holds the world record and Olympic record in both the 5000-meter and 10,000-meter events.

His sights are set on the 5,000-meter and the 10,000-meter titles at the Olympics this summer. Bekele is the world record holder at both distances, but has experienced calf and knee injuries over the past couple of years.

He recently told the U.K.'s Telegraph, he's "free of injury" and aiming for the gold.

English track-and-field athlete Jessica Ennis is practicing for her first Olympics; she didn't attend Beijing in 2008 because of a foot injury. Despite the setback, she has remained extremely competitive, winning gold medals at the 2009 and 2010 World Championships.

The 26-year-old grew up in Sheffield, England, where she started training at a young age. She focuses on multi-eventing disciplines and 100-meter hurdles - and is the former World heptathlon champion and former world indoor pentathlon champ.

Ennis, who has been training six hours a day, six days a week, said she's looking forward to the Olympics taking place in her native country.

"Having a home Olympics is a great thing to have and as an athlete you have to make the most of these opportunities because they're once in a lifetime but, at the same time, we are athletes and first and foremost we want to win as many medals as possible and be the best we can be," she told the U.K.'s Guardian this year. "We need to get that balance, which I think the athletes are getting."

In April, Lin was sidelined with a waist injury and had to withdraw from the semifinals of the Badminton Asia Championships. The injury won't affect his entry to the Olympics, as he has already qualified.

China's "Super Dan" is on a mission for a second Olympic title in the midst of what some have dubbed "Lin-Danity."