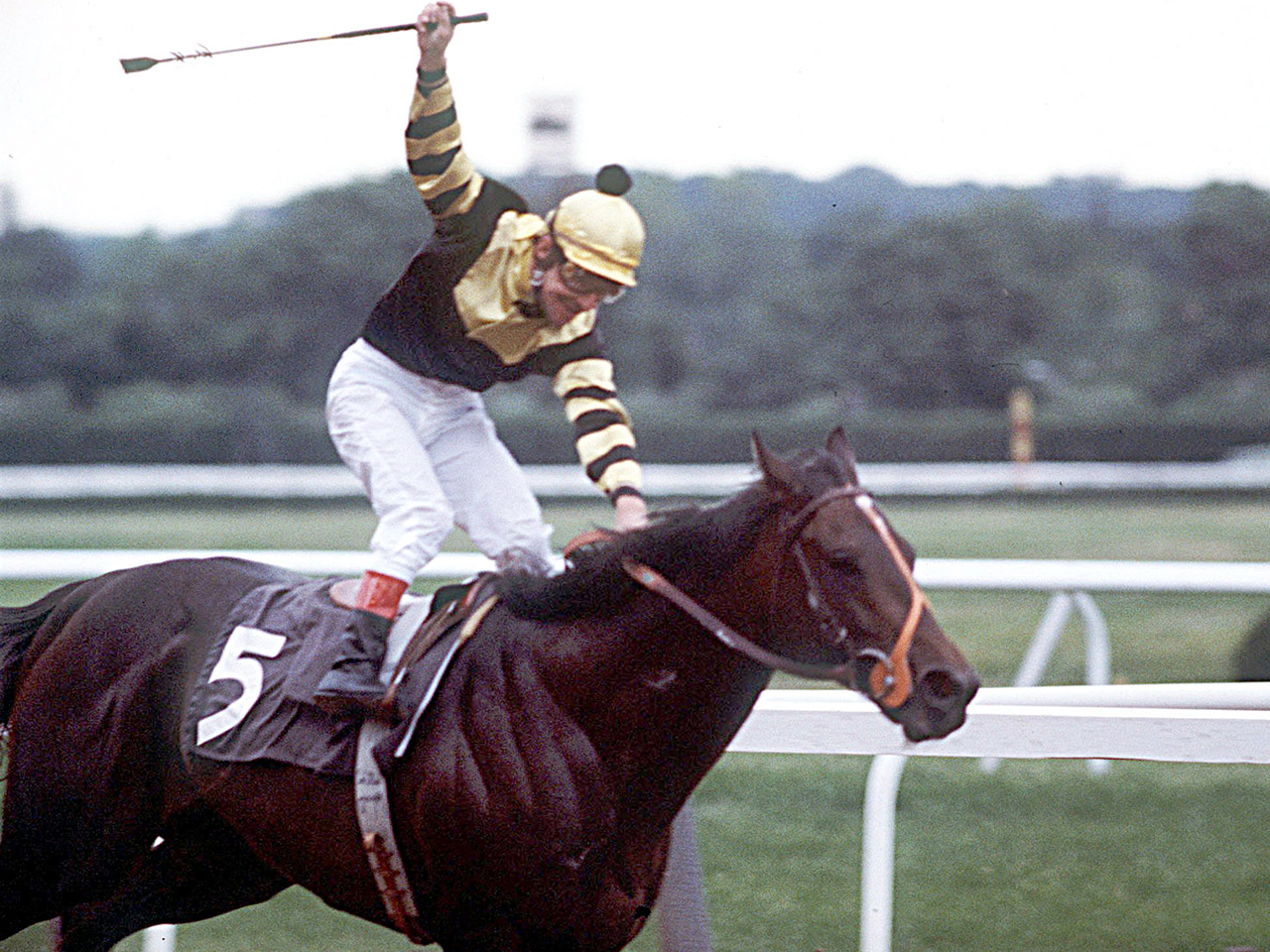 (CBS News) After I'll Have Another's victories in the Kentucky Derby and the Preakness Stakes, his entry in Saturday's Belmont Stakes presents the latest in a long line of challengers looking to end the Triple Crown's decades-long drought.

Not since Affirmed's victory by a head over Alydar in 1978 has a contender swept horse racing's three premier races. The 34-year gap stands as the longest in the history of the prize since Sir Barton won the first Triple Crown in 1919.

Dry spells aren't new to racing's prestigious prize. In 1973, Secretariat ended the 25-year reign of what was then the prize's last champion, Citation, winning the Belmont by the race's largest margin (31 lengths) and in its fastest time (2:24). (Secretariat's own reign was short-lived with Seattle Slew defeating Run Dusty Run by four lengths in 1977.)

Take a trip back to the '70s and watch the last three Triple Crown victors win what's known as the Test of the Champion.

The 105th Belmont featured a field of five horses, but it was basically a one-horse race, even before the starting gates opened.

Secretariat was listed at 1-9 odds, according to records kept by the New York Racing Association. Clerks at the betting windows weren't allowed to take show bets, which pay out if a horse finishes first, second or third. For a $2 bet, the horse known as "Big Red" paid out $2.20 to win and $2.40 to place, a bet that the horse will come in first or second.

Track announcer Chic Anderson called the race for CBS Sports. His description of Secretariat at the end of the backstretch says it all:

When filming began on the 2010 movie "Secretariat," William Nack, the ex-Sports Illustrated reporter whose book influenced the film, told The Associated Press that the colt's race was "the greatest sporting event up to its time."

The only horse who took the Triple Crown with an undefeated career record made winning the Belmont look easy.

Seattle Slew went wire-to-wire on the muddy track from post No. 5 at 2-5 odds. The writer summarizing the race on the chart noted the colt "won with something left." Jockey Jean Cruget felt comfortable enough with the lead to stand up in his saddle and wave "victoriously" about 20 yards before the finish line.

A year after Seattle Slew's victory, there wouldn't be any jockeys raising their arms ahead of the wire.Affirmed's finish by a head over Alydar stands as one of the Belmont's smallest margins of victory. By the time they met on a Saturday in June, the last Belmont won by a head was 70 years earlier, in 1908, when Colin edged Fair Play. Few runnings of the race have been decided by smaller margins. In 1978, the previous close race was Jaipur's 1962 victory by a nose over Admiral's Voyage.As Affirmed and Alydar barreled down the homestretch in their head-to-head race, Anderson had the call:

"The two are heads apart, and Alydar's got a lead! Alydar put a head in front, right in the middle of the stretch. It's Alydar and Affirmed battling back along the inside. We'll test these two to the wire! Affirmed under a left-hand whip. Alydar on the outside, driving. Affirmed and Alydar, heads apart. Affirmed's got a nose in front as they come on to the wire!"