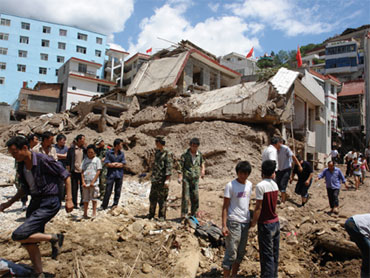 Rescuers dug through mud and wreckage Monday searching for more than 1,100 people missing after flash floods and landslides struck northwestern China, one of a series of floods across Asia that have killed hundreds and spread misery to millions more.

In Pakistan, frustrated victims railed against the government's anemic relief effort for the estimated 13 million affected by the country's worst-ever floods, while rescuers in mountainous Indian-controlled Kashmir raced to rescue dozens of stranded foreign trekkers and find 500 people still missing in flash floods that have killed 140.

Vehicles carrying aid supplies choked the road over bare, eroded mountains into the remote county seat of Zhouqu. Bodies wrapped in blankets were collected and laid on truck beds.

"There were some, but very few, survivors. Most of them are dead, crushed into the earth," said survivor Guo Wentao. Associated Press Television News showed the bodies of his younger brother and sister, wrapped in quilts, being carried away on a stretcher as crying relatives followed.

Work was under way to restore power, water and communications. It was not known how many of the missing were in danger or simply out of contact.

More rain is expected in the region through Tuesday morning, the China Meteorological Administration said on its website.

The blockage had formed a 2-mile-long artificial lake on the river that overflowed in the pre-dawn hours, sending deadly torrents crashing down onto the town. Houses were ripped from their foundations, apartment buildings shattered, and streets covered with a layer of mud and water more than a yard deep.

This area of China is known to be prone to landslides, worsened by deforestation, erosion and the weakening of cliff faces by the massive 2008 earthquake that struck Sichuan province just to the south.

State broadcaster CCTV showed Premier Wen Jiabao comforting victims. At one point he was shown calling out to people waiting to be pulled from their buried home, saying: "Don't move! We're getting you out."

China's worst flooding in a decade has killed more than 1,100 people this year. Floods have caused tens of billions of dollars in damage across 28 provinces and regions.

In Pakistan, the United Nations said - the 2004 Indian Ocean tsunami, the 2005 Kashmir earthquake and the 2010 Haiti quake.

The death toll in each of those three disasters was much higher than the 1,500 people killed so far in the floods that first hit Pakistan two weeks ago. The Pakistani government estimates more than 13 million people have been affected.

"It looks like the number of people affected in this crisis is higher than the Haiti earthquake, the tsunami or the Pakistan earthquake, and if the toll is as high as the one given by the government, it's higher than the three of them combined," Maurizio Giuliano, spokesman for the U.N. Office for the Coordination of Humanitarian Affairs, told The Associated Press.

Rescue workers have been unable to reach up to 600,000 people marooned in the northwestern Swat Valley, where many residents were still trying to recover from an intense battle between the army and the Taliban last spring, Giuliano said.

Victims' frustrations showed no sign of dissipating as heavy rains continued. Rising national anger has been directed at an already unpopular government that has deployed thousands of soldiers for aid but has been overwhelmed by the scale of the disaster.

Manzoor Ahmed, 25, was one of thousands of people who fled their homes in Sindh province in the south.

"It would have been better if we had died in the floods as our current miserable life is much more painful," said Ahmed, who spent the night shivering in the rain after he fled with his family from the town of Shikarpur.

Thousands of Pakistanis in the neighboring districts of Shikarpur and Sukkur camped out on roads, bridges and railway tracks - any dry ground they could find.

"I have no utensils. I have no food for my children. I have no money," said Hora Mai, 40, sitting on a rain-soaked road in Sukkur along with hundreds of other people. "We were able to escape the floodwaters, but hunger may kill us."

But an Associated Press reporter who traveled widely through the worst-hit areas in Sindh over the past three days saw no sign of relief camps or government assistance.

Meanwhile, the death toll from flash floods in the remote desert mountainsides in Indian-controlled Kashmir rose to 140 with the recovery of eight more bodies overnight, police said Monday. The dead included five foreigners, but their nationalities were not immediately known. An estimated 500 more people were missing.