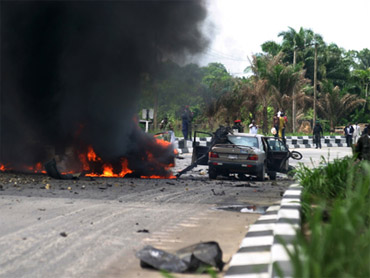 Attackers killed 12 people Wednesday morning in a small Christian village in central Nigeria, officials said, cutting out most of the victims' tongues in the latest violence in a region where religious fighting already has killed hundreds this year.

The attack almost mirrored the tactics used by those who carried out similar massacres in Christian villages last week when more than 200 people were slaughtered.

Under the cover of darkness and a driving rain, raiders with machetes entered the village of Byie early Wednesday, setting fire to homes and firing gunshots into the air to drive frightened villagers into the night, witness Linus Vwi said.

"It was raining. They took that advantage," Vwi said.

Vwi said he and about 20 neighbors rushed into the surrounding wilderness, cowering in bushes as they listened to screams.

He said the attackers spoke Fulani, a language used mostly by Muslim cattle herders in the region. Officials and witnesses blamed Fulani herders for the killings last week.

Fulani community leader Sale Bayari denied that Fulanis took part in those killings, though he said the community suffered a similar massacre recently.

Six people were wounded in the overnight raid and taken to a local hospital, said Mark Lipdo, leader of a regional Christian nonprofit group. He said attackers burned down 15 homes during the violence.

The dead included seven women, four children and one man, Lipdo said. Attackers removed the tongues of most of the victims, witnesses said.

It was unclear why attackers took the victims' tongues. In Nigeria, killers sometimes take body parts of their victims for black magic or "juju" rituals, later using them as charms.

Attacks this month come after more than 300 people - mostly Muslim - were killed in January violence in the nearby city of Jos and its surrounding villages.

Nigeria, a country of 150 million people, is almost evenly split between Muslims in the north and the predominantly Christian south. The recent bloodshed has been happening in central Nigeria, in the nation's "middle belt," where dozens of ethnic groups vie for control of fertile lands.

The violence, though fractured across religious lines, often has more to do with local politics, economics and rights to grazing lands. The government of Plateau State, where Jos is the capital, is controlled by Christian politicians who have blocked Muslims from being legally recognized as citizens. That has locked many out of prized government jobs in a region where the tourism industry and tin mining have collapsed in the last decades.

Wednesday morning, state radio immediately began broadcasting news about the deaths to the tense community. State spokesman Gregory Yenlong appealed for the calm, saying the government remained on top of the situation and would bring the attackers to justice. However, killings continue despite a dusk-til-dawn curfew in a region supposedly protected by Nigerian security forces.

The latest killings add to the tally of thousands who already have perished in Africa's most populous country in the last decade over religious and political frictions. Rioting in September 2001 killed more than 1,000 people. Muslim-Christian battles killed up to 700 people in 2004. More than 300 residents died during a similar uprising in 2008.