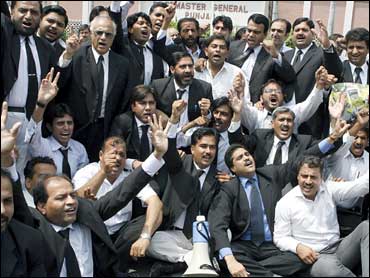 
The Pakistani military and local officials in the country's tribal region along the Afghan border were still awaiting news Monday on the release of as many as 130 military and paramilitary soldiers kidnapped last week.

The fate of the missing soldiers remained unclear despite claims Friday by Pakistani officials that the men had been released.

"For the past one and a half days, we have not had any communication with these people. Their status right now remains unclear", Major General Waheed Arshad, the Pakistani military's chief spokesman, told CBS News.

Arshad said a tribal council for conciliation, known as a "jirga", had been sent to negotiate with the militants who kidnapped the soldiers, "to find out exactly where we stand".

In Peshawar, capital of the Northwest Frontier Province, a senior government official told CBS News, there was still no clear progress on securing the soldiers' release. "As of now, I can't say if these men will be released, and if so, how soon," he said on condition of anonymity. The troops were kidnapped in Waziristan, a volatile region in the Northwest Frontier Province.

A second Pakistani official, also in Peshawar, on the same condition of anonymity told CBS NEWS, the militants were demanding the release of a number of hardline militants captured by the government. "The problem is that once you allow such a hostage exchange for prisoners, there will be no end to this kind of thing going on again and again" he said.

News of the kidnapping has come at an inopportune moment for President Gen. Pervez Musharraf, Pakistan's beleaguered U.S.-backed military ruler.

Musharraf is facing increasing confrontation with the primary opposition parties. Plans by former Prime Minister Nawaz Sharif to return home from exile in a week - defying government threats that he may be arrested upon arrival - have re-energized his Pakistan Muslim League-Nawaz (PML-N) party.

The party has a large following in the Punjab province - Pakistan's most populous region, home to more than 60 percent of the 165 million-strong population. Sharif was arrested in a bloodless coup led by Musharraf in 1999 and sent to exile in 2000. Musharraf and Sharif have become sworn political enemies.

Hopes that the president may be able to secure a power sharing agreement with Benazir Bhutto, another former prime minister and leader of the Pakistan People's Party (PPP), were dealt a blow Saturday when Bhutto announced the talks between the two sides had stalled. The U.S. and Britain are believed to have privately urged Musharraf to reach an agreement with Bhutto that would bring the support of a populist politician to his side, and help lift his increasingly sagging credentials.

"He badly needs to team up with a key Pakistani politician. That's why the stalled talks with Benazir Bhutto are very worrying", a senior European diplomat told CBS News on condition of anonymity.

Another senior western diplomat in Islamabad warned the kidnappings in the tribal areas threatened the 90,000 Pakistani soldiers deployed in the region in support of the U.S.-led war on terror.

Last week, Taliban militants released 15 soldiers kidnapped earlier, after a 16th was beheaded and a video tape of his beheading by a teenaged boy was delivered to Pakistani officials.

Pakistan has deployed up to 90,000 regular military troops in the border region as it seeks to buttress the U.S.-backed effort to clamp down harder on al Qaeda and the Taliban, who appear to be making a comeback in the area.

In spite of Pakistan's oft-repeated claim of supporting the U.S. effort, U.S. officials have warned that Pakistan needs to intensify its hunt for militants in the area where they say al Qaeda has consolidated its presence in the last couple of years.

Farhan Bokhari has been covering southeast Asia for several large European news organizations for 16 years. Based in Islamabad, his focus is security issues, in particular al Qaeda and the regional aspects of the global fight against terrorism.