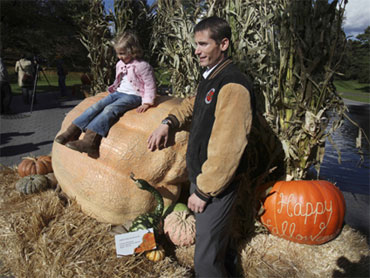 Guinness World Records has confirmed that a massive pumpkin grown in Wisconsin is officially the world's heaviest.

The gourd grown this year by Chris Stevens of New Richmond tips the scales at 1,810.5 pounds. That's 85 pounds heavier than the previous record, a 1,725-pound pumpkin grown last year in Ohio.

Stevens' pumpkin has a circumference of 186.5 inches, or more than 15 feet. When turned on its side, the pumpkin is more than waist-high to an average-size person.

Stevens unveiled his pumpkin earlier this month at the Stillwater Harvest Fest in Minnesota. He said at the time his secret is a precise mixture of sunshine, rain, cow manure, fish emulsion and seaweed.