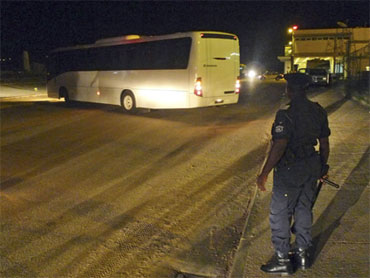 According to a brief statement from Antonio Nito, the prosecutor in charge of Cabinda province, two unidentified members of the Front for the Liberation of the Enclave of Cabinda forces, or FLEC, were captured Sunday near the site of Friday's shooting.

A FLEC leader reportedly in exile in France said Monday his group had been targeting Angolan troops escorting the Togolese team.

"In war, anything can happen, this is only the beginning," Rodrigues Mingas, who calls himself the group's leader, told France-Info radio.

However, an organization that reunites former FLEC members who started a peace process with the Angolan government in 2006 said that the attack had likely been made by dissident FLEC members.

"This attack has been committed by armed gangsters who just want to sabotage the peace process," said Andre Puango, coordinator of the Cabinda forum for dialogue.

The Togolese team was driving to Angola to take part in the African Cup of Nations tournament when gunmen opened fire on the bus Friday. Togo's assistant coach and team spokesman were killed, as was the Angolan bus driver.

Eight were wounded, including a goalkeeper flown to South Africa for treatment. Doctors said Monday it was too soon to say whether Kodjovi "Dodji" Obilale will recover enough to play again, but they are optimistic. He was listed in good condition Monday, an improvement from serious a day earlier.

Meanwhile, three days of mourning were declared in Togo, where sobbing relatives met a plane late Sunday carrying the victims of the attack. Weeping women threw themselves to the ground and had to be helped up.

"Our boys went to Angola to celebrate the best in African football (soccer) but they came back with dead bodies and bullet wounds," said Togbe Aklassou, a traditional ruler from the Be area of Lome.

Togo's players had wanted to compete to honor the dead, but their government dispatched the presidential plane after saying it was not safe for them to stay.

Togo's Prime Minister Gilbert Houngbo said Angola had not done enough to protect the team after the attack in Cabinda, an oil-rich region that has seen occasional separatist violence.

"We fully understand our government's decision to leave because they didn't receive enough guarantees for our security," forward Thomas Dossevi told The Associated Press. "We as players, we wanted to stay to honor the memory of our dead people, but both positions are understandable."

Togo team captain Emmanuel Adebayor, speaking in an interview with France's RMC radio Sunday, said the team had decided finally to "pack our bags and go home" after the Manchester City striker got a call from Togo President Faure Gnassingbe himself urging them to return.

Boarding the plane, Adebayor told journalists: "We have to mourn our dead. We go back home to do this."

In the tournament's opening match Sunday, Mali and host Angola tied 4-4. The first match to be played in Cabinda was scheduled for later Monday.

"Despite the terrorist attack, Cabinda will remain a hosting city," Angolan President Jose Eduardo dos Santos said in a speech at the opening ceremony before the Mali-Angola match. "There is no need to be afraid."

Mingas, who calls himself FLEC's leader, said Monday his group was behind the attack.

But another FLEC official in Cabinda has denied responsibility. In a telephone interview with the AP on Sunday, Tiburcio Tati Tchingobo said his group had no objection to the tournament, even with play in Cabinda.

"The tournament can go on, but we are worried about security. We don't have any problem with our fellow African brothers," said Tchingobo, minister of defense in the self-declared Federal State of Cabinda, when reached on a satellite phone number.

The conflicting reports could stem from divisions among Cabinda's pro-independence groups. Several claim the name FLEC.

Cabinda's armed groups have been weakened by the factional fighting. But periodic announcements from the Angolan government that the Cabinda uprising has been quelled - either by force or negotiations - have been followed by new outbreaks of violence.

The Angolan government has denied charges from international human rights groups its military has committed atrocities in Cabinda. In Sunday's exclusive interview, Tchingobo said he feared the attack on the Togolese team would spark a crackdown by Angolan forces in Cabinda after the tournament ends.

Angola has been struggling to climb back from decades of violence, and its government was banking on the tournament as a chance to show the world it was on the way to recovery.

Cabinda's unrest is unrelated to - and often overshadowed by - a broader civil war that lasted nearly three decades and ended in 2002.
By AP Sports Writer Samuel Petrequin; AP Writer Ebow Godwin in Lome, Togo, contributed to this report.