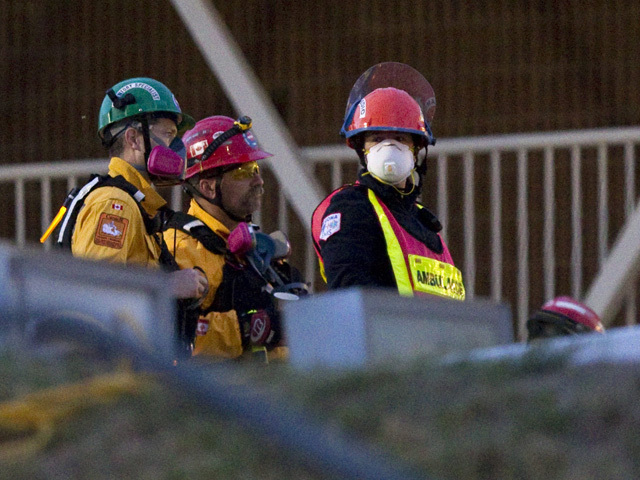 (AP) ELLIOT LAKE, Ontario - Officials recovered two bodies after dismantling a partially collapsed Ontario mall on Wednesday and said they don't believe other victims are inside. The renewed rescue effort came after angry residents shouted down fears that the unstable structure made the work too risky to continue.

Bill Neadles, a spokesman for the Toronto-based Heavy Urban Search and Rescue team, said the second victim was being removed.

Rescuers had not detected signs of life after hearing breathing inside the rubble early Monday, nearly two days after Saturday's collapse. Authorities called off work Monday afternoon amid fears of another collapse, but dozens of residents protested in front of city hall, saying that abandoning trapped comrades would be unthinkable in the culture of their former mining community.

Work at the Algo Centre Mall in Elliot Lake resumed late Tuesday, with anxious residents camping outside and watching a huge robotic arm strip away the mall's facade.

Neadles called it a miracle that only two people died when the roof collapsed onto an area near the food court and directly over a lottery kiosk.

"I had the opportunity to review the security film, and it is a miracle. There were 26 people in the food court," he said. "There were people that had just left the lottery terminal three seconds before. I know it's very unfortunate what's happened, but it's a very big miracle that it wasn't so much more devastating."

He said his workers took the work stoppage hard, saying they didn't have the authority or equipment to continue and had to wait until Ontario Premier Dalton McGuinty asked for an alternative.

"It's devastated us," Neadles said. "We'd stay another four or five weeks if we had to."

A crowd of residents at the news conference gave Neadles a standing ovation.