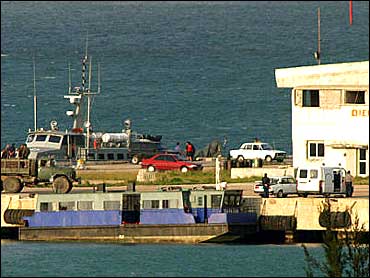 Cuba on Tuesday reported two boat hijackings — one quickly foiled as three hijackers apparently killed one another and another in which a craft with an undetermined number of people aboard was taken to Bahamian waters.

The incidents appeared to be the first significant attempts to hijack a boat or plane in Cuba since the April 11 execution of three men convicted of seizing a ferryboat in Havana Bay — a case that helped chill Cuba's relations with Europe.

In the first incident, three hijackers, all allegedly with "terrible criminal backgrounds," were accompanied by a woman and her two sons as they tried to seize the fishing boat Ferrocemento No. 18 at about 9 a.m. on Monday at the port of La Coloma, nearly 100 miles west of Havana, according to officials.

"The objective of the delinquents was to travel to the United States," the Interior Ministry said.

The ministry said the attackers, armed with a pistol and a knife, overpowered a guard and seized the boat. Unable to get it started, they grabbed a boat skipper to help, but he escaped by jumping overboard.

Other fishermen and officials blocked the boat's path and the three men threatened to kill the woman and her sons, age 17 and 10.

About an hour later, witnesses heard shots and the 17-year-old fled the vessel carrying his injured 10-year-old brother, accompanied by the woman, the ministry said. All were taken to a nearby hospital.

Officials who boarded the vessel an hour later found two men dead and a third who died soon afterward.

The 17-year-old told police that the kidnappers first shot his brother and then tried to kill him, but the gun misfired. He told them that a shootout among the hijackers ensued, according to the ministry, which also said that the mother apparently had conspired with the kidnappers.

The attackers were identified as Francisco Lamas Caron, 29; Luis Alberto Suarez Acosta, 22, and Yosvani Martinez Acosta, 27. All had been jailed repeatedly on charges of cattle rustling — a serious crime in Cuba, as it is in the United States. Lamas twice was imprisoned for armed robbery.

The woman and her children were not identified.

In a second incident, the ministry said border guards in Boca de Nuevitas, some 340 miles southeast of Havana, reported an unusual departure by a craft owned by Geocuba, a government company that does geological exploration and mapping.

The ministry said officials notified the U.S. Coast Guard — but was told that U.S. officials declined to participate in following the vessel.

Cuba launched planes and patrol boats to chase the Geocuba craft, but they held back because — as it told U.S. officials — "it is not the policy of the government of Cuba to attack hijacked vessels with people aboard on the high seas," the ministry said.

Officials blamed both incidents on the U.S. Cuban Adjustment Act, which makes it difficult to deport Cubans who can land in the United States.

The speed of April's executions shocked many abroad and had seemed to quell a wave of hijackings here. The ferry was hijacked on April 2, the trial took place on April 7 and the executions carried out four days later.

The executions, along with Cuba's arrest of 75 dissidents, led the European Union to announce it was restricting relations with the island's government.

The ferry was seized a day after a man who said he had two grenades forced a Cuban passenger plane to fly to Key West, Fla. The grenades turned out to be fake.