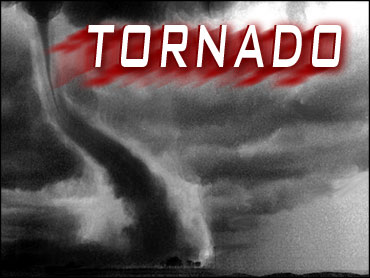 Two people were killed when apparent tornadoes touched down in southwest Missouri.

One person was killed and 15 people injured late Tuesday when an apparent tornado leveled a mobile home park and damaged four homes in Lawrence County.

Some 50 to 60 mobile homes were in the Chesapeake mobile home park, and of those, only a few remain standing.

In Barton County, farther to the west, emergency management officials said one person was killed and five people injured when an apparent tornado touched down south of Kenoma. At least three homes and one mobile home were destroyed.

In Chesapeake, the 47-year-old woman who was killed was in a home just southeast of the trailer park, Seneker said. The woman's home was destroyed.

Two people suffered serious injuries. Fourteen of the injured were in the mobile homes. The other injured person is the husband of the woman who died, according to Lawrence County Sheriff Doug Seneker.

Few of the estimated 30 trailers at the mobile home park remained standing. When asked how the residents of the Lucky Lady Mobile Home Park were able to survive, Seneker said: "By the grace of God."

Most of them, he said, were asleep when the storm passed through the town around 11 p.m.

"We heard it coming - we heard it coming big," said one woman who rode out the twister with her family in their trailer. "I never been through this, I'm from California. My husband said get the kids and get underneath the bed, and that's where we went and our trailer barely went up. It was over in seconds."

Seneker said the trailer park was uninhabitable for now.

"Debris is teetering and it's not a place for people to be wandering about," he said.

Residents were evacuated to a hotel in Mount Vernon and to relatives' homes, both those whose homes were destroyed, and those with homes still standing, because of concern that the twister may have damaged propane and other gas tanks.

Despite the damage, Seneker described the tornado, which followed a four-mile path on the ground south of Interstate 44, as "small to medium." Authorities planned to survey the wreckage from the air Wednesday morning.

"What we're viewing here is atrocious," said National Weather Service meteorologist Lanny Dean. "There are Christmas presents mud-strewn and unwrapped lying all over the ground. Only God knows where they came from."