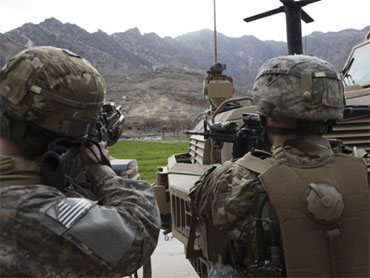 A roadside bomb killed two U.S. service members in southern Afghanistan on Saturday as the country's top NATO commander acknowledged an increased risk to foreign troops will accompany an influx of reinforcements aimed at routing the Taliban.

The south is the Taliban heartland and is expected to be a major focus of fighting as the U.S. and NATO allies send 37,000 additional troops to turn the tide of the war.

"The end state of the mission is to protect the population and isolate the insurgency in a way where it doesn't constitute a threat to the Afghan government," Gen. Stanley McChrystal, the top U.S. and NATO commander in Afghanistan, said Friday during a visit to the western command. "This will not happen in a short period or in an easy way. It's realistic to expect an increase of risk to coalition forces."

Saturday's deaths bring the total number of Americans killed so far this year to at least 22, according to an Associated Press tally.

Also Saturday, militants kidnapped a district police chief, Jamtullah Khan, and two other officers on a nighttime foot patrol near the eastern border with Pakistan - the latest in a series of attacks against Afghan officials.

Gen. Khalilullah Zaiyie said reinforcements had been sent to help with a search for the three men, who were seized in the Shigal district of Kunar province just after 1 a.m.

Nobody has claimed responsibility for the kidnapping, but Zaiyie blamed Taliban militants who are active in the area for the attack.

It occurred a day after the governor of Wardak province escaped an assassination attempt when his convoy struck a roadside bomb, killing four Afghan soldiers and wounding another. Gov. Halim Fidai, who was unharmed, was on his way to inspect a school after meeting with elders in the Jagatu district.

Two armed men, including a local Taliban commander, were arrested as they tried to flee the scene, according to the governor's spokesman Shahidullah Shahid, who also was in the convoy.

In other violence, militants hiding among demonstrators fired on police Saturday, sparking a gunbattle in the middle of a protest over the deaths of four men in a NATO-Afghan raid, officials said. At least two people were wounded.

NATO and Afghan police have said the four killed late Wednesday were insurgents, but villagers in the Qara Bagh district in Ghazni province insist they were civilians.

Protesters have taken to the streets for three straight days and have blocked traffic on a highway that links the major cities of Kabul and Kandahar, forcing trucks and vehicles to wait for hours.

The protest Saturday turned violent when armed militants hiding in the crowd began shooting at police, according to the district's chief administrator, Yasouf Saraji Andar. "Policemen also opened fire to defend themselves and two people were wounded," he said.

Similar violence broke out earlier this month in the southern province of Helmand when six people were reportedly killed in scuffles between Afghan security forces and protesters angry over a rumour that NATO forces had desecrated a Qur'an. NATO has denied its troops disrespected the Muslim holy book. 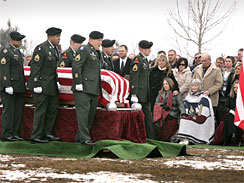 A recent U.N. report showed the number of civilian deaths attributed to allied troops dropped sharply, while Taliban suicide bombings and other attacks killed more people. But reports of Afghan deaths at the hands of NATO and government forces continue to prompt anger.

North of the capital, a NATO helicopter was damaged Saturday when its front rotor blade accidentally struck the ground upon landing in the Parwan province. There were no injuries and no hostile action was involved, the international force said.

Three women were killed and two men wounded Saturday when their taxi was hit by militant gunfire in Paktika province, which is near the Pakistani border, according to a statement issued by NATO. The international force said the taxi driver brought the group to a nearby NATO base where the wounded received medical care.

Also, a policeman was killed and another wounded in a gunbattle after suspected Taliban militants ambushed a checkpoint in the Baghlan province, according to the provincial government. Spokesman Mahmood Haqman said two militants also were killed.

Separately, seven civilians were killed and another wounded when an old mine exploded while they were trying to clear it from a field in the northwestern province of Faryab, according to the Interior Ministry.

Afghanistan is one of the most heavily mined countries in the world - a legacy from decades of Soviet occupation and subsequent civil wars. Tens of thousands of mines and unexploded bombs still pepper the rugged country as violence has slowed efforts to clear them.
By Associated Press Writer Rahim Faiez