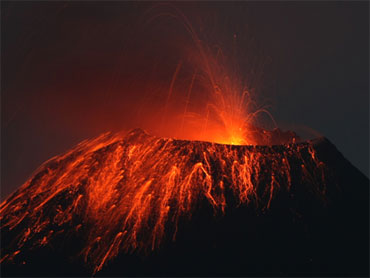 Guatemala's Pacaya volcano started erupting lava and rocks Thursday afternoon, blanketing the country's capital with ash and forcing the closure of the international airport. A television reporter was killed by a shower of burning rocks when he got too close to the volcano, about 15 miles south of Guatemala City.

In the village of Calderas, close to the eruption, Brenda Castaneda said she and her family hid under beds and tables as marble-sized rocks thundered down on her home.

"We thought we wouldn't survive. Our houses crumbled and we've lost everything," Castaneda said while waiting for rescue teams to take them to a shelter at a nearby school.

Winds blew the ash over the country's most populous city, Guayaquil, and led aviation officials to halt flights out of the Pacific port and from Quito to Lima, Peru.

Neither of the eruptions was expected to disrupt airports in neighboring countries like Iceland's Eyjafjallajokul volcano did in Europe.

In Guatemala, the ash billowing from Pacaya has been thick and falls quickly to the ground, unlike the lighter ash that spewed from the volcano in Iceland and swept over much of Europe, disrupting global air travel, said Gustavo Chigna, a volcano expert with Guatemala's institute of seismology and volcanos.

In Ecuador, the ash cloud drifted out over the Pacific Ocean and was tapering off Friday evening.

Sandro Vaca, an expert at Ecuador's National Geophysics Institute, said Tungurahua's latest eruption was not in the same league with Iceland.

In Guatemala, at least 1,910 people from villages closest to the Pacaya volcano were moved to shelters. Some 800 homes were damaged in the initial eruption late Thursday. A second eruption at midday Friday released ash in smaller amounts from the 8,373-foot mountain, according to the Central American country's Geophysical Research and Services Unit. 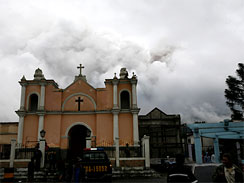 (AP Photo/Moises Castillo)
The unit reported an ash plume 3,000 feet meters high that trailed more than 12 miles to the northwest.

(Left: The San Vicente de Pacaya church in San Vicente Pacaya, Guatemala is backdropped by smoke from the Pacaya volcano on Friday, May 28, 2010.)

The blanket of ash was three inches thick in some southern parts of the city. The government urged people not to leave their homes unless there was an urgent need.

The capital's La Aurora airport would be closed at least until Saturday, said Claudia Monge, a spokeswoman for the civil aviation agency. Flights were being diverted to Mundo Maya airport in northern Guatemala and Comalapa in El Salvador.

The television reporter who was killed, Anibal Archila, had appeared on Channel 7 broadcasts standing in front of a lava river and burning trees, talking about the intense heat.

David de Leon, a spokesman for the national disaster committee, confirmed his death.

The most active of Guatemala's 32 volcanoes, Pacaya has been intermittently erupting since 1966, and tourists frequently visit areas near three lava flows formed in eruptions between 1989 and 1991.

In 1998, the volcano twice spewed plumes of ash, forcing evacuations and shutting down the airport in Guatemala City.

Eruptions at Tungurahua, 95 miles southeast of the Ecuadorean capital of Quito, buried entire villages in 2006, leaving at least four dead and thousands homeless.