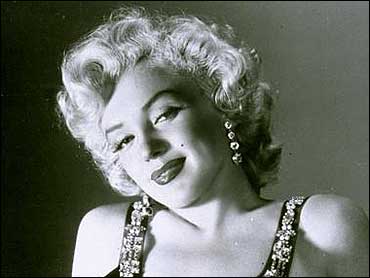 Forty-two years after her death, Marilyn Monroe is hotter than ever.

She's so hot that she has become the symbol of this year's Cannes Film Festival.

Organizers of the 57th fest, painfully aware of last year's criticism (particularly by the American media) that Cannes was too dry and elitist, have gone 180 degrees: They're happy to point out that this is a populist festival.

The official poster this year is symbolic. A drawing depicts a spotlight on a little girl (her country of origin is unknown; it may be France, or it may be Cartoonland), but the shadow she casts is of Monroe in "The Seven-Year Itch." The subliminal message: Hollywood has cast its shadow over the festival.

The Monroe silhouette also adorns the Un Certain Regard poster -- apparently that little girl was given a one-way ticket back to Cartoonland -- while numerous photos of the actress appear in the fest's official catalog.

Souvenir shops on the Rue d'Antibes have long featured Monroe items (along with other favorites like Betty Boop and Tintin). The official Cannes acknowledgement makes those shops seem prescient.

But those Monroe statuettes and T-shirts and lamps pale in comparison to the dress created by Max Chaoul, a fancy dress shop on the Rue d'Antibes.

The choice of Monroe as a fest icon has surprised some. Aside from Chaplin's the Little Tramp or that big ape on the Empire State building, few images convey popular film as immediately as Monroe with her billowing skirt from "Itch." As Gilles Jacob said when announcing this year's lineup, "People are tired of annoying auteur films."

So Hooray for Hollywood. One-fourth of the movies in competition are English-language, including "Shrek 2," the Coen brothers' "The Ladykillers," "The Life and Death of Peter Sellers" and closer "De-Lovely." And the out-of-competition roster includes "Troy," "Bad Santa," "Dawn of the Dead" and "Kill Bill Vol. 2."

Cannes is affirming itself as the festival of the people, by the people and for the people. The Hollywood movies, the Monroe image, all of it, scratches a 57-year itch.