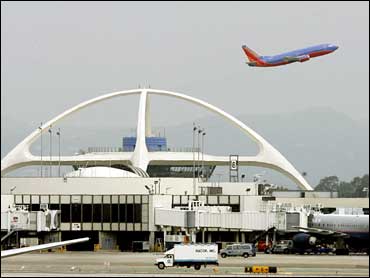 Domestic airline delays in 2007 were the second worst on record, the Transportation Department said Tuesday.

The industry's poor performance reflects rising passenger demand coupled with congestion in the skies and on tarmacs as the Federal Aviation Administration grapples with a growing number of air traffic controllers nearing retirement age. In 2006, domestic flights were late about 24.5 percent of the time.

President Bush has demanded action to avoid another summer of record delays, but there is little consensus among airlines, airport operators, Congress and the administration on what should be done.

But the Port Authority of New York and New Jersey, which runs John F. Kennedy International Airport, LaGuardia and Newark Liberty, said the new policy was a minor fix for a major problem. In 2007, those three airports had the lowest on-time arrival rates, and aviation officials say delays there cascade throughout the system and cause three-quarters of all flight delays.

The trade group and the Port Authority prefer flight-path changes and improvements aimed at increasing the flight capacity at airports.

The airlines and the FAA are pressing for a new, $15 billion satellite-based air traffic control system, dubbed NextGen, that will take nearly 20 years to complete to improve operations. Last August, the FAA awarded ITT Corp. a contract worth up to $1.8 billion to build the first portion the system.

Peters on Monday said the Bush administration's $68 billion fiscal 2009 budget proposal for the department would more than double the investment in NextGen technology to $688 million. But airport operators criticized the proposal for cutting the FAA's airport improvement program to $2.75 billion in funding, which is $765 million less than this year and more than $1.1 billion below the level in the FAA reauthorization bill pending in Congress.

The nation's 20 largest carriers reported an on-time arrival rate of 64.3 percent in December, down from 70.8 percent in the same month in 2006 and from 80 percent in November. December 2007 was the third worst month on record, but December 2000 was even worse with on-time performance of about 62.8 percent, which helped save last year from being the worst overall for delays.

Customer complaints rose nearly 40 percent to 849 in December compared with the year-ago period, according to the government data. The rate of mishandled baggage rose slightly to 9 reports per 1,000 passengers from more than 8.9 reports a year ago.

American Eagle Airlines, which operates regional flights for AMR Corp.'s American Airlines, had the worst December with more than 46 percent of its flights delayed by at least 15 minutes. Aloha Airlines had the best on-time arrival rate in December at 93 percent.

Atlantic Southeast Airlines, a subsidiary of SkyWest Inc., had the worst on-time arrival rate for all of last year at 64.7 percent, while Hawaiian Airlines topped the list at more than 93 percent.