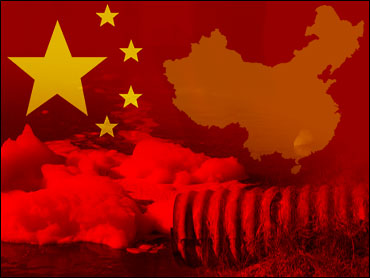 The bodies of 21 babies, some with hospital identification tags around their tiny ankles, washed ashore on a river in eastern China and two mortuary workers were detained for allegedly dumping them.

News footage Tuesday showed the babies — at least one of whom was stuffed in a yellow plastic bag marked "medical waste" — strewn along a dirt riverbank near a highway overpass. A few wore diapers. All were caked in mud.

Some of the babies appeared several months old, while the official Xinhua News Agency said the bodies included fetuses.

Local residents and firefighters recovered the bodies Monday after they were discovered under a bridge spanning the Guangfu River on the outskirts of Jining in Shandong province.

Interviews with residents who made the grisly find were broadcast on the Web site of the Shandong Broadcasting Company. One said he thought a body was a toy, but then he spotted several others. Another expressed concern because the river is a source of drinking water for villagers living nearby.

Hospital ID tags on eight of the babies helped investigators trace them back to the Affiliated Hospital of Jining Medical University, Xinhua reported.

Hospital mortuary workers Zhu Zhenyu and Wang Zhijun were sacked and taken away by police, Xinhua said, citing Jining government spokesman Gong Zhenhua. The babies' families had paid the pair to dispose of the bodies, but they instead dumped them at the river.

It was not clear whether Zhu and Wang dumped the bodies directly in the river or if they made an attempt to bury them.

"It exposes a serious loophole in the hospital's management and indicates a lack of ethics and legal awareness of some hospital staff," Gong was quoted as saying. "It exerts a very negative impact on society and teaches us a profound lesson."

Reports said the babies ranged in age from newborns to several months old. One of the bluish-green identification tags visible in the news video says, "Boy; mother's name is Man Hongmei; born in April 2009."

The reports did not give the number of girls or boys. Xinhua said the bodies of the 21 babies were cremated, though it was not clear whether they had all been identified.

In China, most families are permitted to have only one or two children and a traditional preference for sons runs strong. The abandoning, aborting and killing of newborn baby girls is common in rural China, although gender-selection abortions are illegal.

Infants who die from disease are often abandoned or buried in unmarked graves, not being old enough to be formally considered part of the family. But those deaths usually occur in small numbers.

An official from the information office of China's Health Ministry said she was not aware of the case, while telephone calls to the Jining Health Bureau and the Shandong Health Bureau rang unanswered Tuesday.

More than 1,000 comments were posted on Netease, a Chinese news Web site, within hours of reports on the discovery of the bodies.

"These people are completely without conscience and morals and should be shot," one comment said.