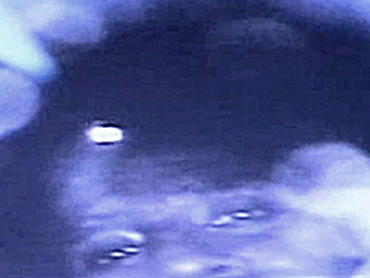 Rescuers are lowering capsules containing rehydration tablets, glucose and oxygen down a long hole to 33 miners who surprised the world by staying alive while trapped a half-mile underground for 2½ weeks.

Raising hopes further Monday, a second bore hole punched into the chamber where the miners are entombed, and a third probe was nearing the spot, Mining Minister Laurence Golborne reported.

The hole that reached the miners Sunday will continue to be used to lower supplies, the second will be for communication and the third will provide ventilation, Golborne said.

Their ordeal, however, is far from over.

These thirty three men reportedly can move around a bit outside of the refuge chamber, a room that's about 500-square feet, or the size of a small studio apartment, reports CBS News correspondent Seth Doane. It's built to hold 35 people, has ventilation shafts, and before they were discovered - just a couple of days' worth of emergency food and water.

But some familiar with the conditions suggest that it could be worse than any other confined space you might imagine, be it a prison, a submarine, or even a spaceship. Add to that the darkness, the soaring heat and humidity.

So along with the questions of physically getting the miners out, are others about the psychological toll.

Above ground, doctors and psychological experts are debating how to keep them sane during the estimated four months it will take to dig a tunnel wide enough to get them out of the safety chamber 2,200 feet underground, where they have been buried since Aug. 5.

Officials said they were implementing a plan that includes keeping the miners informed and busy.

"They need to understand what we know up here at the surface, that it will take many weeks for them to reach the light," Health Minister Jaime Manalich said.

Tony Oppegard, a former attorney with the Mine Safety and Health Administration (MSHA), suggested that the miners may not know how long the rescue operation could take, and how long they will remain underground.

Oppergard told CBS' "The Early Show" that rescuers would likely consult with psychologists to determine "whether or not that's wise to let them know."

Through a newly-installed communication system, the miners told authorities Monday afternoon that they had eaten canned tuna, milk and biscuits stored in the refuge after the disaster. They used a backhoe to dig for trapped water.

"They had two little spoonfuls of tuna, a sip of milk and a biscuit every 48 hours," said Dr. Sergio Aguilar, a physician on the rescue team.

Aguilar did not say how long those meager supplies lasted after the landslide that caused a tunnel to collapse inside the San Jose gold and copper mine about 530 miles north of Chile's capital, Santiago.

Officials released a portion of the recording of the dialogue, in which miners are heard singing Chile's national anthem.

In a dialogue earlier Monday, each man spoke and reported feeling hungry but well, except for one with a stomach problem, a Chilean official said. The miners asked for toothbrushes.

On "The Early Show," Oppergard said he found it hard to believe the estimate of four months it would take to drill a hole that is large enough to retrieve the men.

"Using a comparison, at the Quecreek Mine in Somerset, Pa., back in 2002, those miners were trapped about 240 feet from the surface and they were rescued in a little more than three days when the Mine Safety and Health Administration and the state of Pennsylvania drilled down and put a capsule down and brought those nine miners up one at a time," Oppergard said. "So I'm hoping that that estimate of 120 days turns out to a lot longer time than is needed."

But he acknowledged that problems can arise drilling down so deep. "It will be a delicate operation because drill bits can break, they can get hung up in the rock, it's not a straight line down," he said.

And even if they reach the miners, there is still the challenge of bringing them back to the surface safely: "They're going to be in some type of capsule where they'll have to be hoisted up, that's an awfully long distance, and just God forbid that anything would happen to miners while they're being hoisted up to the surface because that would certainly be a major problem," Oppergard said.

Engineers worked to reinforce the first 6-inch-wide bore hole by using a long hose to coat its walls with a metallic gel to decrease the risk of rocks falling and blocking the hard-won passage through the unstable mine.

The lubricant makes it easier to pass supplies through capsules nicknamed "palomas," Spanish for dove. The first of the packages, which are about 5 feet long and take about an hour to descend from the surface, held rehydration tablets and a high-energy glucose gel to help the miners begin to recover their digestive systems.

Rescue teams also sent oxygen down after the miners suggested there was not enough air in the stretches of the mine below where the main shaft collapsed. 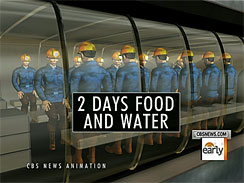 (CBS)
The shelter is a living room-size chamber off one of the mine's lower passages far from the collapse. It is easily big enough for all 33 men, and the men also can walk around in tunnels below where the rocks fell. The temperature where they are is around 90-93ºF.

Actual food will be sent down in several days, after the men's stomachs have had time to adjust, said Paola Neuman of the medical rescue service.

Rescuers also sent down questionnaires Monday to determine each man's condition, along with medicine and small microphones to enable them to speak with their families during their long wait. Rescue leader Andre Sougarret said officials are organizing the families into small groups to keep their talks as orderly as possible.

Meanwhile, an enormous machine with diamond-tipped drills capable of carving a 26-inch-wide tunnel through solid rock and boring at about 65 feet a day was on its way from central Chile to the mine, outside Copiapo in north-central Chile.

The machine was donated by the state-owned Codelco copper company and carried on a truck festooned with Chilean flags. Just setting it up will take at least three more days.

Besides dealing with the miners' immediate physical needs by providing medicine to restore their raw stomachs and sleep cycles, rescuers were preparing psychiatric counseling. The miners reported that a shift foreman named Luis Urzua, 54, had assumed leadership of the trapped men.

The men already have been trapped underground longer than all but a few miners rescued in recent history. Last year, three miners survived 25 days trapped in a flooded mine in southern China, and two miners in northeastern China were rescued after 23 days in 1983. Few other rescues have taken more than two weeks.

Chile is the world's top copper producer and a leading gold producer, and has some of the world's most advanced mining operations. But both the company that owns the mine, San Esteban, and the National Mining and Geology Service have been criticized for allegedly failing to comply with regulations. In 2007, an explosion at the San Jose mine killed three workers.

Chilean President Sebastian Pinera said Monday that "there is not going to be any impunity" and said investigations were under way.

Shortly after the accident, Pinera fired two top executives of Sernageomin, Chile's mine safety regulator, after reports that the mine had reopened too soon and without real security improvements after a fatal accident three years ago.

The miners' relatives are suing and claim their loved ones were put at risk working in a mine known for unstable shafts and rock falls. Company executives have denied the accusations and say the lawsuits could force them into bankruptcy.