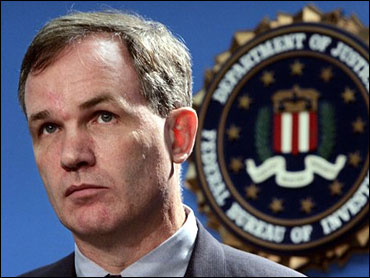 Special counsel Patrick Fitzgerald spent more than an hour Thursday morning at a law firm representing Viveca Novak, a Time magazine reporter whose testimony was being sought in the CIA leak case.

Fitzgerald and an associate emerged from the office of attorney Hank Schuelke at 11:30 a.m. EDT, declined to answer questions and rode away in a taxi cab. A short time later, a court stenographer left the building.

An hour later, Schuelke escorted Novak from the building and helped her flag a taxi. He declined comment when asked if she had provided sworn testimony in Fitzgerald's investigation of the leak of an undercover CIA agent's identity.

The special counsel's meeting with Novak and Schuelke comes a day after Fitzgerald spent three hours meeting with grand jurors about the leak inquiry, which so far has yielded the indictment of Vice President Dick Cheney's chief of staff, I. Lewis Libby.

Fitzgerald had been seeking testimony from Novak about her conversations with Robert Luskin, an attorney for deputy White House chief of staff Karl Rove, who is still under investigation.

Novak, a reporter in Time's Washington bureau, had agreed to cooperate in Fitzgerald's investigation, according to an article in the Dec. 5 issue of the magazine.

For nearly two years, Fitzgerald has been looking into who in the administration leaked the identity of CIA undercover agent Valerie Plame's identity to the news media.

Plame's CIA status was disclosed eight days after her husband, former U.S. ambassador Joseph Wilson, publicly accused the administration of twisting intelligence to exaggerate the Iraqi threat in the run-up to the war.

Rove's legal problems stem from the fact that it was not until more than a year into the criminal investigation that he told the prosecutor about disclosing Plame's CIA status to Time magazine reporter Matt Cooper on July 11, 2003.

Rove says he did not disclose the Cooper conversation to investigators because he had forgotten it. It occurred days before Plame's identity was revealed by the media.

The presidential adviser revealed the CIA employment of Wilson's wife to Cooper two days after another conversation in which Rove and conservative columnist Robert Novak discussed Plame's CIA status.

Robert Novak was the first journalist to disclose Plame's identity, on July 14, 2003. Cooper co-wrote a Time article about Plame on July 17, 2003.

Robert Novak and Viveca Novak are not related.

Viveca Novak specifically has been asked to testify under oath about conversations she had with Luskin starting in May 2004, the magazine reported.

Novak, part of a team tracking the CIA case for Time, has written or contributed to articles in which Luskin characterized the nature of what was said between Rove and Cooper, the first Time reporter who testified in the case.