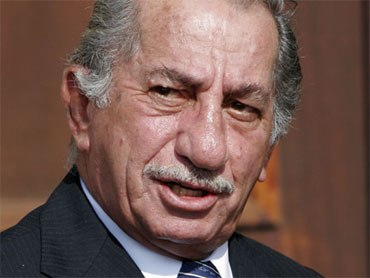 Police in Cyprus say three men have been arrested for the theft of late president Tassos Papadopoulos' body. No further details on the arrests were immediately available.

Three months after it was stolen, the corpse of the former president was found reburied in another grave and the country's justice minister said Tuesday that it had been held for ransom.

But two spokesmen for Papadopoulos' family insisted his relatives had never received a demand for money.

Katsounotos says a tip-off led police to the corpse late Monday. But he wouldn't elaborate in what state the corpse was.

The right-wing Greek Cypriot hard-liner's body was stolen in December during slow-moving reunification talks with Turkish Cypriot leaders. A lack of clear motive and few clues led to speculation that it could have been politically motivated, but authorities suggested early on that ransom was a more likely scenario.

The robbers removed a heavy marble plaque from on top of Papadopoulos' grave on the southern outskirts of the Cypriot capital, Nicosia, then dug down to the coffin and removed the body of the former president on Dec. 11, a day before the first anniversary of his death.

The robbers left few leads at the scene. Lime was strewn over the grave in what investigators believe was an attempt to erase any tracks they might have left behind. Investigators sought the help of the FBI and Interpol as well as Greek and Israeli law enforcement authorities.

But there was little progress in the investigation until Monday, when police found the body in another cemetery after being alerted by his family, who had received a telephone tip, Katsounotos said. Family spokesman Chrysis Pantelides said a man speaking broken Greek had called with information about the corpse and instructed them to contact police.

The former president's body was found inside another grave and covered with a thin layer of soil, he said, adding it had placed in the grave recently. He gave no further details.

Justice Minister Loucas Louca said during a news conference that Papadopoulos' family had received a demand for ransom, but that no money had been paid. He didn't indicate when the demand had been made.

"The conclusion is that ransom was behind the theft and there was no political motive," Louca told reporters, adding that the family had contacted police.

But two spokesmen for the family told The Associated Press that the family had received no such demand.

"Officials must be very careful when they open their mouths," said Vassilis Palmas, a family friend and former government spokesman during Papadopulos' tenure. "The minister said something that is unfounded."

Louca, however, stood by his statement.

"As minister of justice and public order, I'm obliged to tell the truth. All that I stated previously completely reflects the truth and the facts," he said in a second news conference.

The tip about the location of the body came from a phone booth a few miles (kilometers) away from the cemetery, Katsounotos said, adding that investigators examined the booth for fingerprints and other evidence that could lead to the caller's identity.

Louca said the investigation was focusing on Cyprus, and that developments could be expected "very soon." Although he said he was "very optimistic" the case would be solved, he refused to say whether arrests were imminent.

Relatives, including three of Papadopoulos' adult children, rushed to the cemetery amid heavy police security after being notified of the corpse's discovery.

"The discovery of our beloved Tassos' corpse has put an end to the agony that we have been living through the last three months and has brought back peace and tranquility to our family," Papadopoulos' widow Fotini said.

"We hope that the police investigation leads to the capture of the perpetrators as soon as possible," she said, reading from a prepared statement from the family home in the Nicosia suburb of Deftera.

President Dimitris Christofias said he had spoken with Papadopoulos' wife and that he feels "satisfaction and relief just as the family does."

Pantelides said the family would reclaim the corpse for burial after authorities conclude their examinations.

Cyprus was divided into an internationally recognized Greek Cypriot south and a breakaway Turkish Cypriot north in 1974, when Turkey invaded after a coup by supporters of uniting the island with Greece.

Papadopoulos was a central figure in Cypriot politics for decades, with a career spanning most of the island's turbulent history since it gained independence from Britain in 1960. President from 2003 to 2008, he was considered by many right-wing Greek Cypriots to be a champion of resistance against peace accords weighted against them.

A British-trained lawyer, Papadopoulos was a guerrilla leader for the Greek Cypriot group EOKA, which waged an anti-colonial campaign. Later, at age 26, he was the youngest Cabinet minister in the island's first post-independence government.

He ushered a divided Cyprus into the European Union in May 2004 after urging Greek Cypriots to reject a U.N.-brokered reunification plan, which he vilified as entrenching the island's division rather than ending it. Three-quarters of Cypriots rejected it in a referendum; two-thirds of Turkish Cypriots accepted the plan.

The leader was defeated in a February 2008 presidential poll by Dimitris Christofias, former head of the communist-rooted AKEL party.