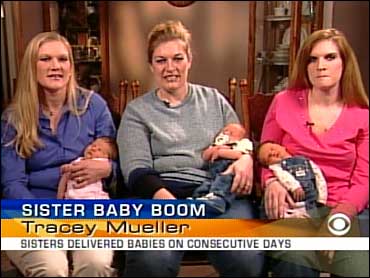 The first surprise was when three Missouri sisters discovered they were pregnant and due around the same time. But the bigger surprise came last week when their babies — Sophia, Jack and Kara — were born on three consecutive days at the same hospital in the St. Louis suburb of St. Charles.

The sisters live in Warrenton, about 40 miles away.

The next morning, Jamie Roden, 24, started feeling queasy. She checked into St. Joseph Health Center in St. Charles in the afternoon, and Kara Grace Roden arrived at 9:23 p.m.

"It was a complete joke the entire pregnancy that we'd have them at the same time. But none of us really thought it would ever happen," Duvel said.

Mueller explained to Syler how the succession of deliveries went: "We went in early Wednesday morning. … And then Tricia came in to visit me at the hospital on Thursday and ended up coming back in Thursday night. That was a surprise, first of all. And then, Jamie came in to visit us both. We were saying, 'Jamie, come on, let's go.' Sure enough, Friday morning, we got a phone call!"

Throughout the marathon of deliveries, the sisters' parents, Sondra and Jack Dames, were on nearly round-the-clock watch at the hospital.

Roden told Syler, "I was the last one (to deliver). I looked at mom right after I had Kara. I said, 'You look awful. You look like you're the one that had the babies and not us.'

"Poor thing, she lived at the hospital. And my dad did, also. They slept in the waiting room for a lot, the days they were there."

Sondra and Jack were looking forward to the next "madhouse" family dinner now that their brood of grandchildren has grown to 10.

"The only difference is now they'll all have to bring their own groceries," joked Grandpa Jack.

Dr. Evelyne Schuetz, who monitored the sisters' pregnancies, said, "I've had sisters deliver within a week or so of each other, but nothing like this."

Her medical partner offered to deliver the third, but Schuetz said no way.