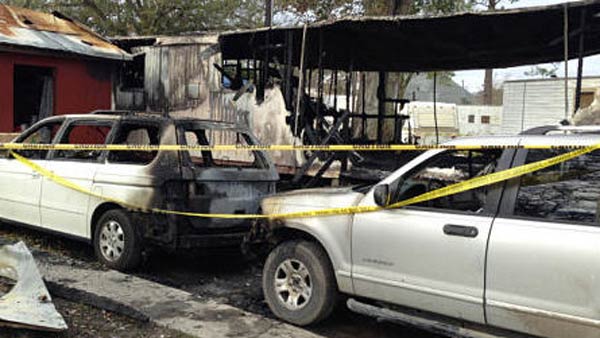 Louisiana State Police said the fire started at a home in the Whispering Oaks Trailer Park in Houma around 2:30 a.m. Officials said there were no working smoke alarms in the home.

Trooper Doug Cain said the girl and two boys who died in the fire were ages 11, 12 and 13. The names of the victims have not been released. Cain added they were from Alabama and had been visiting relatives in Houma. A total of 12 people were in the home when the home caught fire.

Investigators said firefighters arrived on the scene to find the mobile home engulfed in flames. According to Cain, the victims were found inside once the fire was put out. He also said the parents of the victims and five children were taken to Baton Rouge General Hospital for treatment. Some of them had moderate to severe injuries. Two other people escaped unharmed.

The Louisiana Office of State Fire Marshal was called in to assist Terrebonne Parish investigators determine the cause of the fire. LSP reported investigators found the fire started in the living room/kitchen area, but they are still examining several possible causes, including space heaters and candles.

According to Cain, the victims' parents said they were awakened in the bedroom by the smoke that had seeped under the door. He added the father said he was able to grab one child from the living room and run outside to safety. He reportedly said the fire was too intense for him to go back in for the others.

Reports indicate the man's wife and another child made it outside through a bedroom window and other family members sleeping on the other end of the home escaped through a back door.