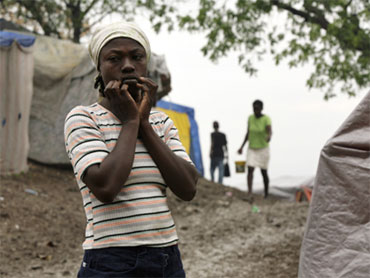 Residents said the tremor struck Haiti's second-largest city of Cap-Haitien shortly after midnight, collapsing the four-story building. Some nearby structures were damaged by the collapse but no other quake effects were reported.

Three survivors were pulled out of the rubble and taken to a hospital, U.N. spokesman Louicius Euguene said.

Haitian police, civil protection authorities and U.N. peacekeepers from Chile and Nepal found the body of another person killed inside.

Cap-Haitien lies along the fault line that produced three moderate earthquakes in nearby Cuba on Saturday. It was not affected by the Jan. 12 earthquake that devastated Port-au-Prince, some 80 miles to the south.

Almost half the victims of that earthquake are under the age of 18, which means about half a million children are still living on the streets, in crowded orphanages or in makeshift camps. Untold thousands of kids are separated from their families, threatened by hunger, disease, sexual assault and even a modern day slave trade.

Witnesses to Sunday's quake said it had been raining, which could have weakened the ground under the apartment building.

U.S. Geological Survey scientists were studying data Sunday for signs of the temblor but had no confirmation of the earthquake. A small, 3.7-magnitude aftershock was felt in Port-au-Prince late Saturday night.

"We don't really see anything that is jumping out of the records but ... we're looking at this," geophysicist Rafael Abreu said.

But residents of the northern port city said they were frightened by the shaking.

Last month three children were killed in Cap-Haitien when a school collapsed after a late-night tremor and heavy rains.

There have been several panics in Cap-Haitien since the Port-au-Prince disaster, including two triggered by evangelical churches that convinced thousands that earthquakes and tsunamis were coming on dates that have since passed.