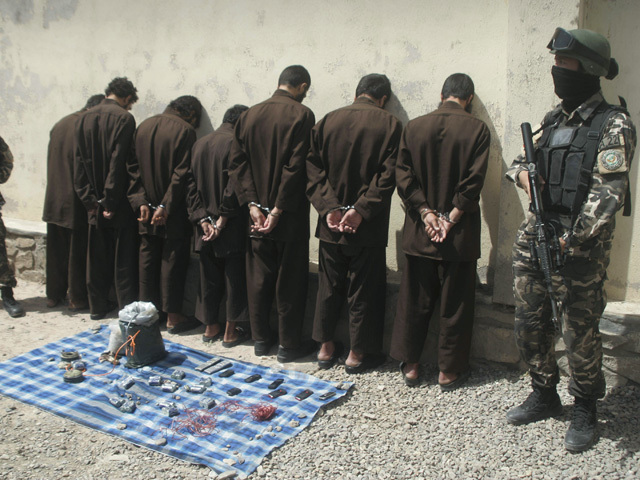 It was the third day in a row the Americans were targeted by insurgents as persistent violence complicates efforts to train Afghans to take over their own security in preparation for the withdrawal of most combat troops at the end of 2014.

Afghan officials initially said a car bomber struck a military convoy, but NATO spokesman Maj. Martyn Crighton, said the attacker hit Afghan and coalition forces at a checkpoint in the city of Khost.

"There was a convoy in the vicinity that responded to the attack," Crighton said.

Baryalai Wakman, a spokesman for the Khost provincial government, said it appeared likely the suicide bomber was on foot.

U.S. Defense Department officials confirmed those killed were Americans and said a suicide vest is suspected to have been used. They spoke on condition of anonymity because details of the incident were sketchy and the officials weren't authorized to talk about it publicly.

The Afghan presidential palace said 17 Afghans also were killed when they were caught up in the massive blast. Two of the Afghan dead were police officers and the rest civilians, Wakman said. Another 32 people were wounded -- all civilians, he said.

In nearby Logar province, meanwhile, seven civilians -- three women and four children -- were killed by a roadside bomb, officials said.

A tractor pulling a wagon crammed with people struck the explosives on a road outside the provincial capital earlier Wednesday, said provincial spokesman Din Mohammad Darwesh. Four men also were wounded in the blast, he said.

The bombings came the day after two attacks in the south in which militants stormed a NATO military base and attacked a police checkpoint. U.S. troops were wounded in the attack on the NATO base, officials said. On Monday, three gunmen dressed in Afghan police uniforms killed one American service member and wounded nine others in Kandahar's Zhari district.

Fighting usually picks up in Afghanistan during the warm summer months, when it becomes easier for insurgents to travel into and around the mountainous country. This summer is particularly important for the international effort in Afghanistan as it is the last fighting season before a significant U.S. military drawdown.

The commander of U.S. and NATO forces in Afghanistan, Marine Gen. John Allen, has to withdraw 23,000 American troops by the end of September, leaving about 68,000 U.S. military personnel in the country. Once the 23,000 U.S. troops depart, Allen is expected to review how the fighting season is going and then will begin to put together an analysis for Obama on how troop withdrawals will proceed next year.

Last year was the deadliest on record for civilians in the Afghan war, with 3,021 killed as insurgents stepped up suicide attacks and roadside bombs, according to the United Nations. The number of Afghan civilians killed dropped 36 percent in the first four months of this year compared with last year, though U.N. officials have said that a likely cause of the drop in violence was the particularly harsh winter.