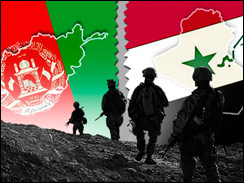 The deaths - in eastern and western Afghanistan - were a reminder that the Afghan war continues to be violent far from the southern Taliban strongholds currently targeted by a surge of U.S. troops. Recent months have been particularly deadly for both NATO forces and Afghan civilians countrywide.

Two of the Americans were killed in a bombing in the east, while the third was killed in the west, NATO said. It did not provide details on where or how they were attacked. Including these deaths, 15 U.S. service members have been killed so far this month.

The bomb, which was remote-detonated, appeared to be targeting a police truck that was driving down the street in Ghazni city, said Ismail Jahangir, a provincial government spokesman.

While it wounded one police officer, the explosion killed two civilian city workers who were cleaning up trash on the street, Jahangir said. An additional four civilians were wounded, he said.