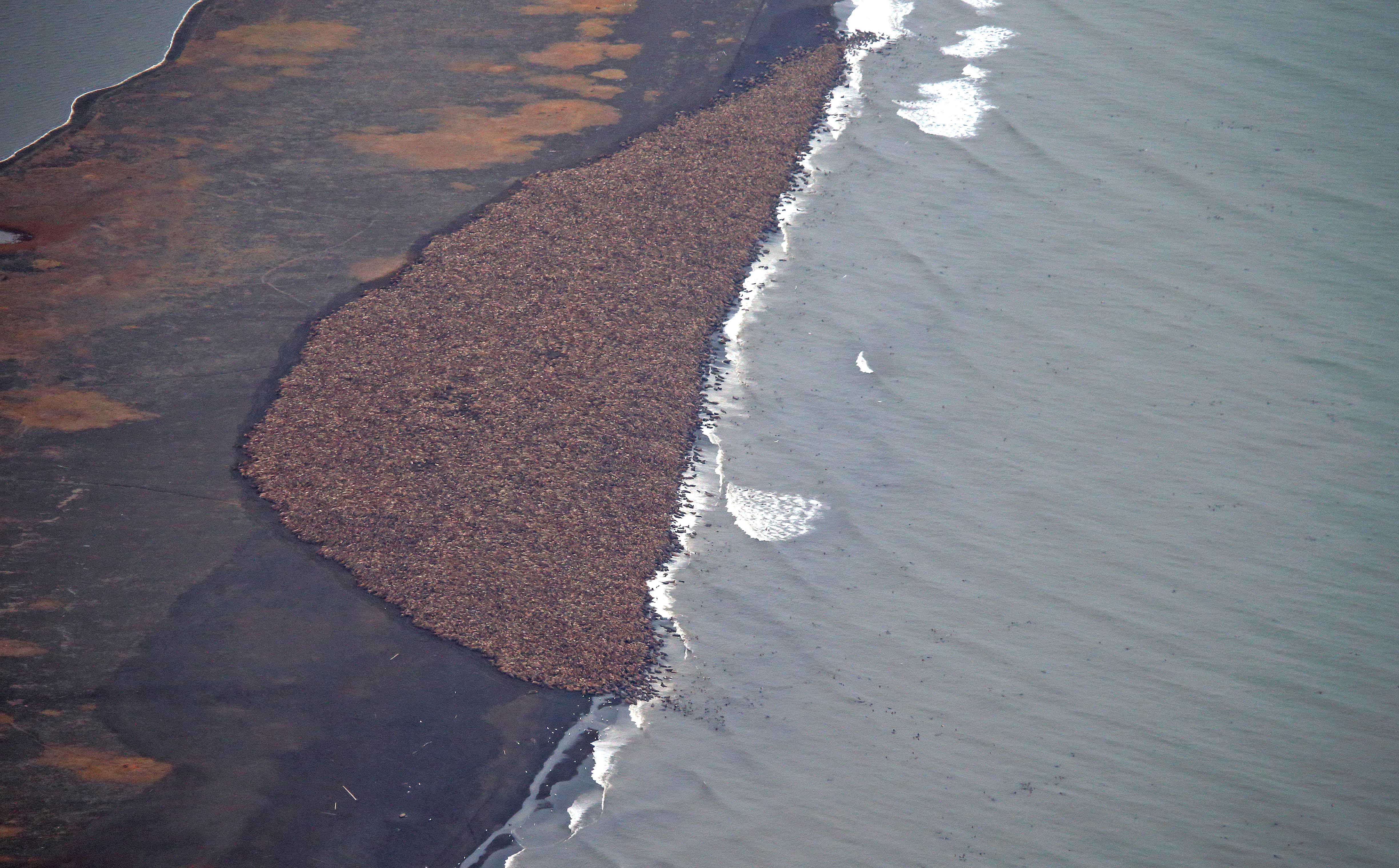 ANCHORAGE, Alaska -- Pacific walrus that can't find sea ice for resting in Arctic waters are coming ashore in record numbers on a beach in northwest Alaska.

An estimated 35,000 walrus were photographed Saturday about 5 miles north of Point Lay, according to the National Oceanic and Atmospheric Administration. Last year, 10,000 were spotted.

Point Lay is an Inupiat Eskimo village 300 miles southwest of Barrow and 700 miles northwest of Anchorage.

Andrea Medeiros, spokeswoman for the U.S. Fish and Wildlife Service, said walrus were first spotted Sept. 13 and have been moving on and off shore. Observers last week saw about 50 carcasses on the beach from animals that may have been killed in a stampede, and the agency was assembly a necropsy team to determine their cause of death.

"They're going to get them out there next week," she said.

The gathering of walrus on shore is a phenomenon that has accompanied the loss of summer sea ice as the climate has warmed.

Pacific walrus spend winters in the Bering Sea. Females give birth on sea ice and use ice as a diving platform to reach snails, clams and worms on the shallow continental shelf.

Unlike seals, walrus cannot swim indefinitely and must rest. They use their tusks to "haul out," or pull themselves onto ice or rocks.

In recent years, sea ice has receded north beyond shallow continental shelf waters and into Arctic Ocean water, where depths exceed 2 miles and walrus cannot dive to the bottom.

Walrus in large numbers were first spotted on the U.S. side of the Chukchi Sea in 2007. They returned in 2009, and in 2011, scientists estimated 30,000 walruses along 1 kilometer of beach near Point Lay.

Young animals are vulnerable to stampedes when a group gathers nearly shoulder-to-shoulder on a beach. Stampedes can be triggered by a polar bear, human hunter or low-flying airplane. The carcasses of more than 130 mostly young walruses were counted after a stampede in September 2009 at Alaska's Icy Cape.

The World Wildlife Fund said walrus have also been gathering in large groups on the Russian side of the Chukchi Sea.

"It's another remarkable sign of the dramatic environmental conditions changing as the result of sea ice loss," said Margaret Williams, managing director of the group's Arctic program, by phone from Washington, D.C. "The walruses are telling us what the polar bears have told us and what many indigenous people have told us in the high Arctic, and that is that the Arctic environment is changing extremely rapidly and it is time for the rest of the world to take notice and also to take action to address the root causes of climate change."

This summer, the sea ice's annual low point was the sixth smallest since satellite monitoring began in 1979.