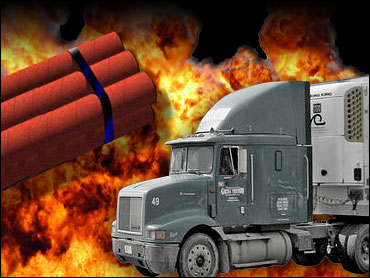 A truck carrying mining explosives blew up after colliding with another vehicle in northern Mexico, killing at least 37 people, including three reporters who had come to the scene, state and federal officials said.

Soldiers, police, emergency officials, nearby residents and reporters were on the scene Sunday night when the a fire broke out and the truck filled with explosives went off, according to Luis Horacio de Hoyos of the Coahuila state Attorney General's Office.

The explosion occurred near the town of Sacramento.

Maximo Alberto Neri Lopez, a federal police official, said 37 people were killed and 150 were injured. He said the explosion left a 10-by-40 foot crater in the concrete.

De Hoyos said three newspaper reporters from the city of Monclova were among the dead.

There were no injuries reported.

A small, left-wing guerrilla group claimed to have attacked a major gas pipeline for the Mexican state oil monopoly Petroleos Mexicanos, or Pemex, in July and at the time at least a dozen major companies were forced to suspend or scale back operations.