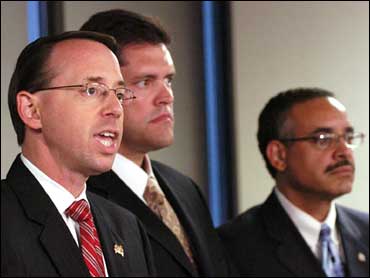 Cooperating witnesses posed as drug smugglers, cigarette smugglers and in one case as a terrorist who wanted to send money to al Qaeda, and asked the defendants to help transfer money. The four-year investigation targeted defendants in the United States, Belgium, Canada and Spain, U.S. Attorney Rod Rosenstein said. Raids were conducted in Maryland, Washington D.C., New Jersey and Spain on Thursday, authorities said.

Many of the defendants were born in Pakistan, according to the indictment.

The indictments send a message to potential terrorists, drug dealers and those thinking about laundering money that "you don't know who you're dealing with," Rosenstein said. Authorities said most of the 39 have been arrested.

Rosenstein described the hawala system as a "crude form of Western Union" in which someone gives money to a money transmitter in one country and receives a code word or number. The person sending the money then gives that code to the recipient in another country, who receives money from their hawala counterpart in that country after giving the appropriate code.

While such businesses are not illegal, they must comply with state and federal requirements, including licensing, reporting transfers of large amounts and refusing to transfer proceeds from illegal activities.

Rosenstein said cracking down on such activities represents an area of focus by the federal government after the Sept. 11, 2001, terrorist attacks.

The defendant who allegedly accepted money from a witness posing as a terrorist was identified as Saifulla Ranjha, who operated a Washington, D.C., money-transfer business named Hamza, Inc. Ranjha conspired with five other defendants to launder more than $2.2 million (euro1.5 million) received from the cooperating witness, prosecutors alleged.

Ranjha relied primarily on a Canadian, Mazhar Chughtai, to arrange bank deposits, and provided the unidentified witness with coded contact information for associates in Canada, England, Spain, Pakistan and Australia, the U.S. Attorney's office said in a statement.

The indictments also include charges of conspiracy to bribe public officials to change their immigration status.

One of the defendants, Aqeel Khalid, a Pakistani man arrested in Seattle, was charged with conspiracy to bribe a public official, bribery, and aiding and abetting.

According to the indictment, Khalid and another man paid $40,000 last year to a cooperating government witness, who they believed would use the money to bribe immigration officials to obtain status as permanent lawful residents of the United States.

Khalid was scheduled to appear in U.S. District Court in Seattle on Thursday afternoon before being transferred to Maryland.