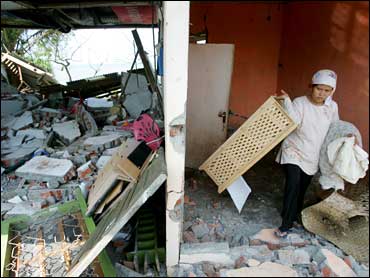 The ground shook so hard Yulinar had to grab a table to steady herself. Minutes later, she heard a warning crackling over the speakers of the neighborhood mosque - a tsunami could crash into her fishing village on Sumatra island at any minute.

But despite the intensity of the shallow undersea earthquake, no waves lashed the beach near her home and the family shack was undamaged. A quirk of nature sent the full force of the tsunami out to sea, preventing a repeat of the 2004 Indian Ocean disaster that killed more than 230,000 people - most of them on Sumatra.

"We heard the mayor's voice and then ran up a hill," said Yulinar, a mother of five, of the 8.4-magnitude quake that shook Indonesia on Wednesday. "It was very bad. I was so scared a tsunami was coming."

A series of powerful aftershocks followed, killing 13 people and injuring 50 others, damaging hundreds of homes, mosques and schools, and unleashing a ten foot high wave.

Mike Turnbull, a seismologist at Australia's Central Queensland University, said the region escaped disaster this time around because the wave spawned by the first, most powerful tremor was pushed to sea rather than land.

"It could have quite easily have been the other way," he said, noting that pressure between the shifting Australian-Indian and Asian plates has been building up over hundreds of thousands of years and was ready to explode. "It's a quirk of nature that this is how it happened."

Most of the damage came from the earthquakes and aftershocks - which had magnitudes of up to 7.8 - but even that was "minimal," Indonesian President Susilo Bambang Yudhoyono said after the Air Force conducted an aerial survey.

That did little to diminish the horror, however, felt by residents in the Sumatran fishing village hit by Wednesday's tsunami, which swept a dozen houses to sea and damaged scores more.

People in Muara Maras watched in horror as the ocean retreated and then raced back to shore.

"I heard people screaming and yelling, 'Tsunami! tsunami!"' said Rukhlan, a 43-year-old fisherman. "I ran to find my children, but they had already gone to the hills."

A 65-year-old woman, Asiah, said she felt weak when the earth started moving beneath her.

"I was having difficulty breathing or walking," she said. "I was afraid. My son grabbed hold of me and carried me out of the house. All I could do was pray."

Some of the worst damage from the quakes - almost all of which were centered less than 120 miles from the shore and about 12 miles deep - occurred in the Sumatran city of Padang.

"At least five large buildings - including mosques, houses and a school - collapsed," said Surya Budhi, who was overseeing emergency response in the area, and rescuers were searching for survivors at a badly damaged car dealership.

A fire also broke out on the fourth floor of a shopping mall.

Many people have refused to return to their homes, fearing a repeat of the 2004 tsunami, which hit Sumatra the hardest. Indonesia has issued and lifted a series of tsunami alerts in recent days, including one Friday after a 6.6-magnitude tremor.

Telephone lines and electricity were disrupted across a large swath of Indonesia, making it difficult to get information about casualties.

But Rustam Pakaya, the chief of Health Crisis Center, said at least 13 had died - a figure based on information gathered from hospitals, clinics and regional health offices. Fifty others were injured.

Indonesia, the world's largest archipelago, with a population of 235 million people, is prone to seismic upheaval due to its location on the "Ring of Fire," an arc of volcanos and fault lines encircling the Pacific Basin.