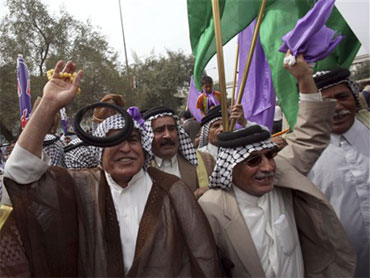 Iraqi police say a twin bombing at a restaurant in a city north of Baghdad has killed 40 people and wounded dozens more.

The police spokesman for Diyala province, Capt. Ghalib al-Karkhi, said at least 65 people were wounded in the blasts in Khalis, some 50 miles north of the capital.

The bombing came just before Iraq electoral officials released the final results of the March 7, 2010, parliamentary election. The blasts were the worst violence to hit Iraq since the vote.

Electoral officials announced results as scheduled despite fears the expected razor-thin margin could spark violence. Ayad Allawi claimed victory for his secular, anti-Iranian coalition as final parliamentary returns Friday showed him edging out the bloc of Prime Minister Nouri al-Maliki, who angrily vowed to fight the results. Allawi won 91 seats to al-Maliki's 89. There are 325 seats in Iraq's parliament.

The results, if they stand, will give Allawi the first opportunity to form a parliamentary majority and Iraq's next government. But they do not automatically mean that he will become prime minister, and the narrow margin sets the stage for months of political wrangling.

Because neither man came close to a majority, the victor will need to cobble together a coalition among the various factions representing Iraq's broad range of religious and ethnic groups.

Al-Maliki tried to distance himself from his sectarian roots and portray himself as a nationalist who helped return stability to Iraq after years of violence. But his support for a ban of hundreds of candidates with alleged ties to Saddam Hussein's regime severely undercut any support he had from Sunnis, who felt the ban unfairly targeted their candidates.

Many Sunnis instead threw their weight behind Allawi, a secular Shiite who has built a broad coalition drawn from both Islamic sects. Allawi, who served as prime minister from 2004 to 2005, has used his anti-Iran rhetoric to appeal to Sunnis who are wary of Tehran's influence with their Shiite-majority government.

The tight race has set the stage for protracted political wrangling over forming a new government that could spark new fighting and complicate American efforts to speed up troop withdrawals in the coming months.

It also has prompted calls for a manual recount of the tallies from the March 7 election amid claims of vote rigging and fraud. However, many international observers as well as Iraqi non-governmental organizations that monitored the election have said the process has basically been free and fair.

Interior Minister Jawad al-Bolani, himself a candidate, called Thursday for a delay in the release of the results to prevent an outbreak of violence among supporters who feel they were disenfranchised.

Despite the concerns, there was no large-scale security buildup on Baghdad's streets ahead of the final tally.

"The security situation is still stable and we have not registered any security violations so far," said Maj. Gen. Qassim al-Mousawi, a spokesman for the city's operations command center. "So far, we have no plans to increase security measures and impose a curfew in Baghdad or other areas after the announcement of election results."

Even so, parts of the city were calmer than usual for a Friday, the first day of the weekend in Iraq.

"Most of the shops are closed and few people are walking ... today because they are waiting for the elections results and fear what will happen after that," said Bahnam Esho, 50, in Baghdad's central Karradah neighborhood.

Elsewhere in the capital, though, it was business as usual. In the Binok and Ur areas of northeastern Baghdad, there were no signs of increased security patrols, and most shops were open. Voters in the ethnically and religiously mixed area differed on their choice of candidate, but several voiced the need to rebuild the war-ravaged country.

"Whoever wins is not important. We want the one premier who offers services," said retiree Oda Mahmoud, 65.

In recent days, many al-Maliki advisers have warned of the threat of violence from the country's Shiite majority should they question the results. Others said there also could be a risk of renewed sectarian conflict should the Sunni minority yet again feel alienated from the government and renew their support for the insurgency.

Allawi will get the first stab at choosing the prime minister and forming the new government, which will run the country as U.S. force drawn down from their current level of about 95,000 to 50,000 by the end of August. All U.S. forces are slated to leave Iraq by the end of 2011.

Al-Maliki's State of Law coalition narrowly trailed Allawi's Iraqiya bloc in overall results released before Friday's final official tally. But the prime minister's bloc was ahead in seven of Iraq's 18 provinces, compared to Allawi's five. The allocation of parliament's seats is based on votes counted per province.

The Iraqi capital was mostly calm Friday, although more than 300 al-Maliki supporters held a rally outside the Baghdad provincial council in the city center, demanding a manual recount of the ballots over allegations of fraud and vote rigging.

The electoral commission has said there were no grounds for a recount.