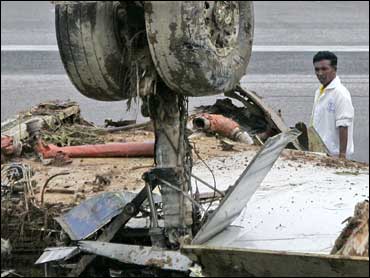 The U.S. Embassy in Thailand has confirmed that five Americans died in the fiery plane crash Sunday on the resort island of Phuket. Eighty-four others, mostly tourists, also died in the crash.

Spokesman Michael Turner told CBS News that one U.S. national escaped the crash. The woman was hospitalized in stable condition. All the victims' families had been notified, he said.

Thai officials say the plane's black boxes have been found and sent to the Unites States to try to determine what caused the crash, Smith adds.

Earlier Monday, an airline official said wind shear may have doomed the flight.

The budget One-Two-Go Airlines flight was carrying 123 passengers and seven crew from Bangkok to Phuket when it skidded off a runway Sunday while landing in driving wind and rain, catching fire and engulfing some passengers in flames as others kicked out windows to escape.

Survivors described how the McDonnell Douglas MD-82 suddenly lifted off again as it was preparing to land, and then came crashing down on the runway. It rammed through a low retaining wall and split in two after it crashed.

"I think he realized the runway was too close or he was too fast or the wind had hit him," Robert Borland, a survivor who lives in Australia, told The Associated Press. "He accelerated and tried to pull out. I thought he is going around again and the next thought was everything went black and there was a big mess and we hit the ground."

(AP Photo/David Longstreath)
Borland, 48, (seen at left) managed to drag himself to an exit where he was pulled to safety by another passenger.

"People were screaming. There was a fire in the cabin and my clothes caught fire, my trousers" he said.

Parinwit Chusaeng, who was slightly burned, said some passengers were engulfed in flames.

"I stepped over them on the way out of the plane," Parinwit told The Nation TV channel. "I was afraid that the airplane was going to explode, so I ran away."

Deputy Transport Minister Sansern Wongcha-um told reporters that 89 people, including 53 foreigners, were killed in the crash, and 41 others were injured. The crash was Thailand's worst air accident in a decade.

Kajit Habnanonda, president of Orient-Thai Airlines, which owns One-Two-Go, said wind shear - the rapid change in wind speed which can impact takeoffs and landings - was a possible cause of the accident. Heavy rains could have contributed to the plane skidding off the runway, Kajit added.

An unofficial list compiled by the Thai Foreign Ministry showed that among the dead are six Britons, three Israelis, two Americans, two French nationals, and one victim each from Australia, Germany, Iran, Ireland and Sweden. More than 30 foreign fatalities had not yet been identified by Thai authorities - accounting for the discrepancy with the figures from the American embassy.

Also killed were the plane's Indonesian pilot and Thai co-pilot.

Parts of the twisted plane lay smoking at the side of the runway, while officials wearing masks carried bodies wrapped in white sheets to an airport storage building.

Transport Minister Theera Haocharoen said the plane's black boxes would be sent to the United States for analysis.

"Hopefully, we will learn in a few weeks the cause of accident," he said.

(AP)
Many of the passengers had been planning to vacation at Phuket, a popular beach resort that was among the areas hit hardest by the 2004 Indian Ocean tsunami, which killed more than 8,000 people on the island.

The accident was likely to raise new questions about the safety of budget airlines in Southeast Asia, which have experienced rapid growth in recent years and often scramble to find qualified pilots. None of Thailand's budget airlines had previously suffered a major accident, but there have been several deadly crashes in Indonesia.

Many budget airlines use older planes that have been leased or purchased after years of use by other airlines. According to Thai and U.S. aviation registration data, the plane that crashed in Phuket was manufactured and put into use in 1983, and began flying in Thailand in March this year.

One-Two-Go Airlines began operations in December 2003 and is the domestic subsidiary of Orient-Thai Airlines, a regional charter carrier based in Thailand.