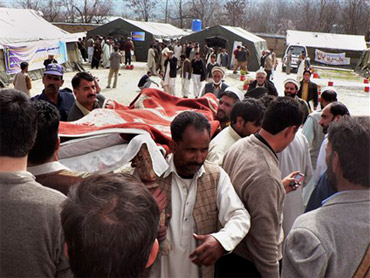 This story was filed by CBS News' Farhan Bokhari in Islamabad.

An attack which left five international aid workers dead in Pakistan on Wednesday "is directly linked to Taliban militants," a Pakistani intelligence official told CBS News' Farhan Bokhari after the incident, sharing an initial assessment of the investigation.

All five of the World Vision staffers killed in the gun and grenade attack in the northwestern Mansehra district were Pakistani nationals, according to police.

The attack prompted warnings that international non-governmental organizations working in the country may face a renewed threat of attacks linked to the Taliban.

World Vision ceased all operations in Pakistan following Wednesday's attack. "Relief and development work have been suspended indefinitely," read a statement on the group's Web site.

"The Taliban are going to look for easy, soft targets. NGOs (non governmental organizations) are unfortunately not particularly well protected. They can be easy targets," said the Pakistani intelligence official, who spoke to CBS News on condition of anonymity. "You cannot discount the possibility of future attacks targeting similar entities."

The attack in Mansehra, north of Islamabad, started when gunmen laid siege to the large Christian aid group's offices. There were few signs of any resistance to the attack, which came just two days after militants blew up a police office used to interrogate some high-value terror suspects in the central city of Lahore. That suicide blast left more than 10 people dead.

After Wednesday's attack, Western diplomats in Islamabad warned that the Taliban, who have suffered recent losses in the Afghan-Pakistan border region, now appear to be pressing ahead with their campaign of terror to disrupt humanitarian work in the north west frontier province (NWFP).

Last month, key Taliban militants, including Mullah Abdul Ghani Baradar, the Taliban military chief in Afghanistan, were arrested in raids in Pakistan, suggesting the militant group was loosing steam after the loss of some of its top figures.

The NWFP, which borders Afghanistan, has been at the center of mounting security concerns for Pakistan. It is a region where the U.S. has carried out a number of missile attacks using pilotless drones, targeting suspected Taliban and al Qaeda safe havens.

Mansehra, where Wednesday's attack took place, is also located in the NWFP.