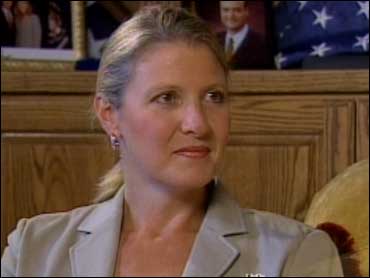 Deena Burnett's husband, Tom, was on United Flight 93 and helped save the White House from being attacked on 9/11.

CBS News has kept in touch with Burnett and her three daughters, Halley, Anna Claire and Madison, and found that five years after Burnett received the worst call of her life, the family is thriving.

Burnett received a call from Tom while he was in the air. She was trying to get the girls ready for school.

"I can remember their pulling on my robe, saying 'Let me talk to dad, let me talk to dad,' " she told The Early Show correspondent Hattie Kauffman. "But I remember just saying, 'Dad's having a little problem and he'll talk to you later.' "

"I remember that mom was holding the phone because my dad had called and she ... held it out like this and goes, 'Oh, no!' " Halley said.

During those brief phone calls, Burnett told her husband that planes had been flown into the World Trade Center and the Pentagon and he gave her a glimpse of the horror he was experiencing. His last words to his wife were "We're going to do something."

As most people know, the passengers stormed the cockpit and the terrorists flew the jet into the ground at Shankesville, Pa.

Burnett, who has written a book about her family's experience called "Fighting Back," joined other families in demanding to hear the cockpit voice recorder. On it she recognized her husband's voice.

"You can hear him yelling in the cockpit," she said. "And then, after that, you could hear the other passengers and crew members chanting those commands, all together ... you could hear them slamming the meal cart into the cockpit door. It was very obvious that they got in."

From the start, Burnett explained to her daughters that their father died a hero. CBS News first spoke to the girls two years after 9/11.

"The bad guy got into the seat and my daddy was trying to throw the bad guys out of the plane, but he couldn't, and it was too late, and so my daddy died," Ana Clare said in 2003.

"And it was just sad," Madison said then.

In the first years after the crash the girls were afraid to leave their mom's side. Today, they are self assured and confident.

"Because it would be a great story to pass on down," Madison recently told CBS News. "It would be one about, um, family, love and courage."

Ana Clare said she remembers her father picking her and her sisters up, and throwing them in the air everyday before he went to work.

"We were so little that he was able to throw us in the air and we would laugh," she said.

"I think it's an honor to be his daughter," Madison said.

Deena Burnett said her daughters talk about their father often and ask questions about him.

"They want to know him as, as a real person," she said. "You know, they'll ask things like, 'Would dad eat this food?' You know, 'What color of shirt would he have worn today?' "

Burnett remembers her husband by looking through some of his personal effects recovered from Flight 93.

"This is a page from his day planner. One page survived," she said as she showed Kauffman. "And these are his articles of clothing and I, I wondered if they were in his suitcase or if possibly he wore this shirt."

It's important for Burnett to remember that day, as painful as it was. She hopes the people of the United States are able to learn from the traumatic experience of having security breached and lives lost.

"I think you learn to not let your guard down so easily as a nation," she said.