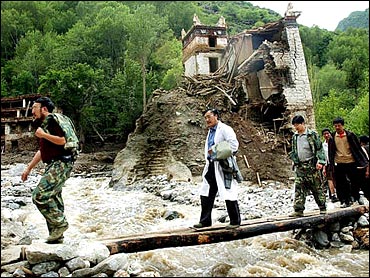 Hopes were fading on Monday for 51 people missing after a rain-triggered landslide in western China, while more than 1.6 million people who escaped flooding in the country's east were living in temporary shelters, officials said.

Rescuers have found no sign of the missing people since the slide of mud and rock struck remote, mountainous Danba county in Sichuan province before dawn Saturday, said a spokeswoman for the provincial disaster headquarters.

"Chances of finding them alive are very slim," said the spokeswoman, who would give only her surname, Tian.

More than 500 people have been killed in floods, landslides and other disasters triggered by rains in areas throughout China this year, according to the Ministry of Civil Affairs.

In India, meanwhile, surging waters washed away more than a dozen homes on the world's largest river island and rain-swollen rivers claimed 10 more lives, raising the death toll from weeks of monsoon flooding in South Asia to 259, officials said Monday.

Waters from the Brahmaputra River spread over the 312-square-mile Majuli island, eroding land and knocking down homes.

In China, more than 1.6 million people have been evacuated from low-lying areas along the swollen Huai River in the eastern provinces of Anhui and Jiangsu, rescue officials said.

Waterlogged dikes on the Huai have begun to give way, forcing villagers to flee empty-handed, said Thorir Gundmundsun, an official of the International Federation of the Red Cross who was visiting flood areas in Jiangsu.

In other areas, authorities have destroyed dikes, diverting water from the Huai into evacuated towns and farmland in the hope of sparing cities downstream.

Thousands of soldiers and paramilitary police have been laboring to shore up dikes and rescue trapped people.

Flooding that strikes China every summer rainy season has been heaviest this year along the Huai. State media say the river in some places is more than 10 inches above previous record high levels.

Gundmundsun said 100,000 people lost their homes in Jiangsu's Xuyi county. He said about 80,000 were living in school buildings while others had erected shelters made of plastic sheets strung up on salvaged tractors.

Large areas beside Hongze Lake, which the Huai flows into downstream, have been inundated, with only the roofs of houses visible above the water, Gundmundsun said.

Hongze, China's fourth-largest freshwater lake, has silted heavily over the years, reducing its capacity to store water. During flood season, authorities try to lower its level and that of the Huai by channeling water into other lakes and 22 diversion areas, the official Xinhua News Agency reported.

In Anhui, one person was swept away by flooding over the weekend, raising the province's flooding death toll in recent flooding to 17, said Wang Xintao, a rescue official with the provincial Civil Affairs Bureau.

More than 900,000 residents have been evacuated from along the Huai and another 1 million people were stuck in villages surrounded by floods, he said.

A disaster-relief official at the Jiangsu Provincial Civil Affairs Bureau said seven people have died in the province from the floods, 744,000 residents have been evacuated and another 699,000 people are stranded by waters.