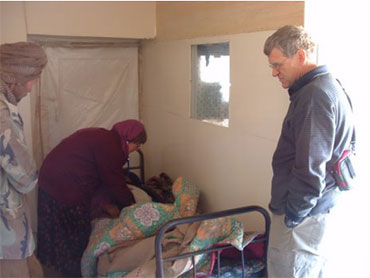 They hiked for more than 10 hours over rugged mountains — unarmed and without security — to bring medical care to isolated Afghan villagers until their humanitarian mission took a tragic turn.

Ten members of the Christian medical team — six Americans, two Afghans, one German and a Briton — were gunned down in a gruesome slaughter that the Taliban said they carried out, alleging the volunteers were spying and trying to convert Muslims to Christianity. The gunmen spared an Afghan driver, who recited verses from the Islamic holy book Quran as he begged for his life.

Team members — doctors, nurses and logistics personnel — were attacked as they were returning to Kabul after their two-week mission in the remote Parun valley of Nuristan province about 160 miles (260 kilometers) north of Kabul. They had decided to veer northward into Badakhshan province because they thought that would be the safest route back to Kabul, said Dirk Frans, director of the International Assistance Mission, which organized the team.

The bullet-riddled bodies — including those of three women — were found Friday near three four-wheeled drive vehicles in a wooded area just off the main road that snakes through a narrow valley in the Kuran Wa Munjan district of Badakhshan, provincial police chief Gen. Agha Noor Kemtuz told The Associated Press.

One of the dead Americans had spent about 30 years in Afghanistan, rearing three daughters and surviving both the Soviet invasion and bloody civil war of the 1990s that destroyed much of Kabul.

Taliban spokesman Zabiullah Mujahid told the AP that they killed the foreigners because they were "spying for the Americans" and "preaching Christianity." In a Pashto language statement acquired by the AP, the Taliban also said the team was carrying Dari language bibles and "spying gadgets."

Frans said the International Assistance Mission, or IAM, one of the longest serving non-governmental organizations operating in Afghanistan, is registered as a nonprofit Christian organization but does not proselytize.

Frans said the team had driven to Nuristan, left their vehicles and hiked for nearly a half day with pack horses over mountainous terrain to reach the Parun valley where they traveled from village to village on foot offering medical care for about two weeks.

"This tragedy negatively impacts our ability to continue serving the Afghan people as IAM has been doing since 1966," the charity said in a statement. "We hope it will not stop our work that benefits over a quarter of a million Afghans each year."

Aid agencies provide vital care for the Afghan people but as they increasing become a target for the Taliban, many may reconsider if their work is worth the risk, Clark reports.

Among the dead was team leader Tom Little, an optometrist from Delmar, New York, who has been working in Afghanistan for about 30 years and spoke fluent Dari, one of the two main Afghan languages, Frans said. Little, along with employees from other Christian organizations, were expelled by the Taliban government in August 2001 after the arrest of eight Christian aid workers — two Americans and six Germans — for allegedly trying to convert Afghans to Christianity.

He returned to Afghanistan after the Taliban government was toppled in November 2001 by U.S.-backed forces. Known in Kabul as "Mr. Tom," Little supervised a network of IAM eye hospitals and clinics around the country largely funded through private donations.

"He was a remarkable man, and very committed to helping the people of Afghanistan," said David Evans of the Loudonville Community Church, New York, who accompanied Little on a 5,231-mile road (8,419-kilometer) trip to deliver the medical team's Land Rover vehicles from England to Kabul in 2004.

"They raised their three girls there. He was part and parcel of that culture," Evans said.

Little had been making such trips to Afghan villages for decades, offering vision care and surgical services in regions where medical services of any type are scarce.

The work has long been fraught with risk, but Evans said Little was a natural for the job. He spoke the language, knew the local customs, and had the patience and diplomatic skills to handle sticky situations.

Another relief organization, Bridge Afghanistan, said on its website that the group included one of its members, Dr. Karen Woo, who gave up a job in a private clinic in London to do humanitarian work in Afghanistan. A message posted last March on the Bridge Afghanistan website said she was "flat broke and living in a war zone but enjoying helping people in great need."

In a fundraising blog posted last month, Woo said the mission to Nuristan would require hiking with pack horses through mountains rising to 16,000 feet (5,000 meters) to reach the Parun valley, a harsh, isolated area about 9,500 feet (3,000 meters) above sea level where an estimated 50,000 people eke out a primitive existence as shepherds and subsistence farmers.

"The expedition will require a lot of physical and mental resolve and will not be without risk but ultimately, I believe that the provision of medical treatment is of fundamental importance and that the effort is worth it in order to assist those that need it most," she wrote.

"The area ... we will reach is one of great harshness but of great beauty also. I hope that we will be able to provide medical care for a large number of people."

Names of the other foreigners would not be released until the bodies could be brought to Kabul for identification, Frans said.

Frans told the AP that he was skeptical the Taliban were responsible. He said the team had studied security conditions carefully before continuing with the mission.

"We are a humanitarian organization. We had no security people. We had no armed guards. We had no weapons," he said.

Authorities in Nuristan heard that foreigners were in the area and sent police to investigate, according to Nuristan Gov. Jamaluddin Bader. The police provided security for the final three or four days of the mission and escorted them across the boundary into Badakhshan, he said. The escorts left after the team told them that they felt safe in Badakhshan, he added.

Frans said he last talked to Little, over a scratchy satellite phone connection, on Wednesday evening. On Friday, the Afghan driver who survived the attack called to report the killings. A fourth Afghan member of the team was not killed because he took a different route home because he had family in Jalalabad, Frans said.

The surviving driver, Saifullah, told authorities that team members stopped for lunch Thursday afternoon in the Sharron valley and were accosted by gunmen when they returned to their vehicles, according to Kemtuz, the Badakhshan police chief. The volunteers were forced to sit on the ground. The gunmen looted the vehicles, then fatally shot them, Kemtuz said.

The Afghan driver who survived "told me he was shouting and reciting the holy Quran and saying 'I am Muslim. Don't kill me,"' Kemtuz said. The gunmen let the driver go free the next day. A shepherd witnessed the carnage and reported the killings to the local district chief, who then brought the bodies to his home, Kemtuz said.

Aid workers have been often targeted by insurgents.

In 2007, 23 South Korean aid workers from a church group were taken hostage in southern Afghanistan. Two were killed and the rest were later released. In August 2008, four International Rescue Committee workers, including three women, were gunned down in Logar province in eastern Afghanistan.

In October 2008, Gayle Williams, who had dual British and South African citizenship, was killed by two gunmen on a motorcycle as she walked to work in the capital of Kabul. In late 2009, a French aid worker was kidnapped at gunpoint in the Afghan capital. Dany Egreteau, a 32-year-old worker for Solidarite Laique, or Secular Solidarity, who was seen in an emotional hostage video, was later released after a month in captivity.