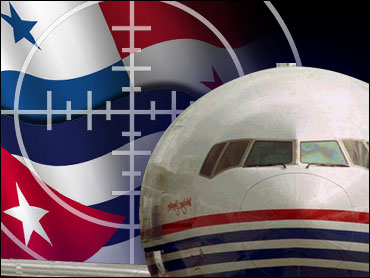 Six Syrians were detained in Panama on Tuesday after the crew on their flight from Cuba alerted authorities to suspicious behavior. An aviation official denied police reports that the Syrians tried to open the cockpit door.

"This is not a hijacking," said Victor de la Hoz, spokesman for the Panamanian Civil Aviation Authority.

Panama's National Police director, Rolando Mirones, said earlier that the passengers approached the cockpit "apparently with the intention of opening a door."

But de la Hoz said the Copa Airlines crew simply notified authorities on the ground that a knife was missing after they served the meal in the first-class cabin, where the Syrians were sitting. He did not say whether the Syrians were suspected of taking the knife.

Mirones said the suspects "did not commit any violent acts inside the airplane, but they raised suspicions," adding: "That is why we are investigating."

The passengers, who were not identified, were being held at Panama City's international airport, he said.

Like many airlines, Panama's Copa ordered cockpit doors locked on commercial jetliners after the Sept. 11, 2001, attacks in the United States.