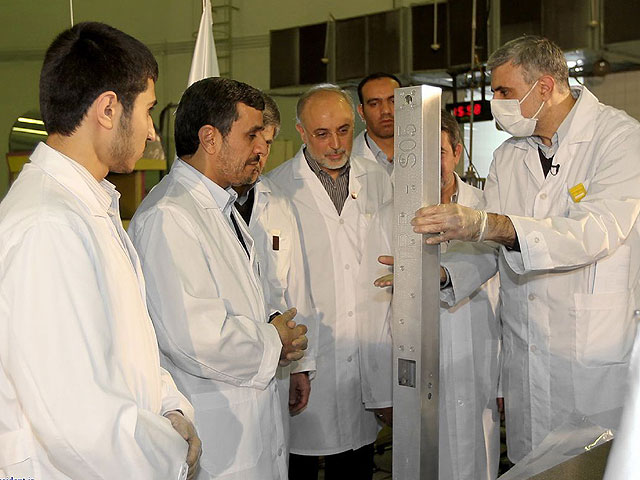 (AP) VIENNA - Iran and six world powers seeking to coax Tehran into curbing its nuclear activities appear to be coming to talks later this month without resolving the differences that scuttled previous rounds, according to recent letters exchanged between the two sides.

One letter, shared with The Associated Press Friday, shows Iran seeking an expert-level meeting ahead of the June 18-19 Moscow negotiations to "prepare the necessary ground for the Moscow talks."

In response, a senior European Union representative speaking for the six powers suggests there is no need for such preliminary talks because the six remain committed to their "straightforward proposal" presented at the last meeting in Baghdad.

Her letter instead urges Tehran to embrace that proposal, which offers a mix of incentives if Tehran reduces uranium enrichment, which can generate weapons-grade material as well as nuclear fuel.

The letters were shared by two diplomats amid a renewed effort in Vienna Friday by the U.N. nuclear agency to coax Iran into reopening a long-stalled probe into suspicions that Tehran worked secretly on atomic arms. The diplomats demanded anonymity because the correspondence is confidential.

The investigation has been stalled for nearly five years by Iran's insistence that it does not need to cooperate because the allegations are based on forged U.S. and Israeli intelligence.

The six powers — the United States, Russia, China, Britain, France and Germany — are watching the Vienna talks closely for signs of Iranian flexibility ahead of their latest attempt to persuade Tehran to stop enriching uranium to a grade that can be turned quickly into the core of nuclear missiles.

Iran says it needs to continue higher-grade enrichment to 20 percent to power a research reactor and to make medical isotopes.

Iran denies any interest in nuclear weapons and wants the international community to ease sanctions before it makes a move, something Western nations among the six powers are unwilling to do. Instead, they are offering spare parts for Iran's aging commercial airline fleet and other goods restricted by sanctions.

An Iran armed with nuclear weapons is considered a threat. Israel has indicated readiness to attack Iran if diplomacy and sanctions fail. The U.S. has said it wants to keep "all options" on the table. Both suspect that Iran is aiming to build nuclear weapons, and Israel believes it would be a prime target.

But the letters show little progress in bridging differences less than two weeks before the Moscow talks and before sanctions are tightened still further on Iran's oil. The U.S already has started to enforce penalties against countries importing Iranian crude, and the 27-nation European Union, which recently accounted for 18 percent of Iran's oil shipments, plans to begin an oil boycott July 1.

Dated Monday, the Iranian letter is signed by Ali Bagheri, his country's No. 2 nuclear negotiator. It complains of a lack "of any oral or written response" to Tehran's request for a preliminary meeting ahead of the Moscow talks.

But senior EU official Helga Schmid suggests in a letter dated Thursday that the six-power proposal at the Baghdad talks stands and addresses "our key concerns on the 20 percent enrichment activities" while offering "interesting opportunities for cooperation in the nuclear and other areas."

Comments posted Friday by Iranian President Mahmoud Ahmadinejad on his website also suggested a tough line by Tehran ahead of the Moscow talks.

"If Iran wants to build an atomic bomb, it doesn't fear anyone and will publicly announce it and no one will be able to prevent it," Ahmadinejad said, while insisting the Iran has no intention of building nuclear weapons.