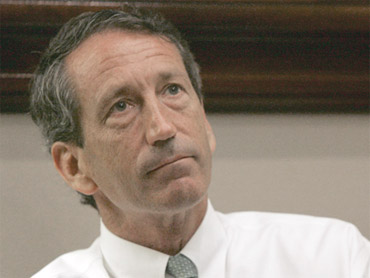 Sixty South Carolina House Republicans asked Gov. Mark Sanford to resign Wednesday, questioning his ability to lead the state since his unannounced summertime trip to see a mistress in Argentina and investigations of his state and private travel that followed.

"Your decision to abandon our state for five days, with no defined order of succession and with no known way to contact you, is inexcusable," said a letter from the lawmakers signed by House Majority Leader Kenny Bingham.

The letter, which listed the names of 59 other lawmakers, came a day after the House speaker issued a similar call. Any move to impeach the GOP governor would begin in the House, which has 72 Republicans, 51 Democrats and one empty seat.

The chamber's Democratic leader, Rep. Harry Ott, D-St. Matthews, has said his caucus will discuss the governor next month. Columbia Democratic Rep. James Smith, who is working with Democrats and Republicans on an impeachment resolution, said there is sufficient support for the measure to get the 83 votes - a two-thirds majority

it would need to pass the House.

If an impeachment bill were to pass, state senators would serve as jurors for a trial.

Sanford, a two-term governor, has been under mounting scrutiny since his June revelation of a yearlong affair with a woman in Argentina. Three ensuing Associated Press investigations raised questions about his travel, leading one state senator to accuse the governor of breaking the law and the state Ethics Commission to launch an investigation.

The term-limited governor has spent the past weeks apologizing to members of civic organizations for his affair, denying doing anything wrong when it came to his travel and attempting to refocus on his final year agenda of restructuring government.

His office on Wednesday said the lawmakers urging him to resign are perpetuating the distractions they're railing against. Spokesman Ben Fox said in a statement that many are political foes "simply responding to media innuendo and an ongoing political circus in Columbia as a cause for action."

"What this letter does provide is further evidence of a disconnect between the people of this state who want to move forward and many politicians in Columbia who see the current situation as a way to achieve political payback," Fox said.

The AP investigations have shown that Sanford appears to have violated state law requiring lowest-cost travel when taking commercial flights, used state aircraft for personal and political trips, and failed to disclose flights on private planes.

Even more egregious than Sanford's abandonment of his post, Bingham wrote, was the pain inflicted on South Carolina residents by his behavior.

"Your actions have been destructive to our state's image on a worldwide stage and are harming the stability of our state on many levels," Bingham wrote. "Unless major changes are made, South Carolina will find itself perpetually sidetracked by the disarray that you have brought upon our state."

The letter follows one by House Speaker Bobby Harrell on Tuesday. The Charleston Republican also asked for Sanford's resignation, saying his actions "have amounted to a self-inflicted wound that has forced unnecessary suffering on the people of South Carolina."

Harrell's letter was the first from one of the Legislature's top officers and came less than two weeks after a similar call from the lieutenant governor.

While Sanford in interviews with the AP called his mistress his "soul mate," he and wife Jenny say they are trying to reconcile. She has moved with their four sons from the official residence in Columbia to the family's coastal home.