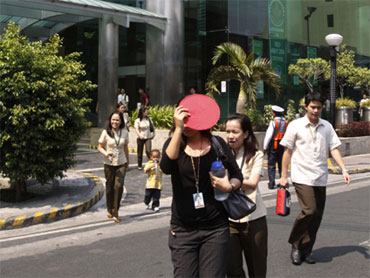 A 6.2-magnitude earthquake struck west of Manila on Thursday, the seismology institute reported, causing buildings in the Philippine capital to shake and sending frightened workers out of their offices.

There were no immediate reports of damage or casualties, and no tsunami alert was issued. Buildings in Manila shook for about 30 seconds.

He said the quake was centered off Lubang Island in Mindoro Occidental province, about 80 miles southwest of Manila, six miles under the seabed.

The U.S. Geological Survey put the magnitude at 6.1 and depth at 21 miles.

The Philippine archipelago lies in the so-called Pacific Ring of Fire where earthquakes are common. It is flanked by the Pacific Ocean to the east and the South China Sea to the west with undersea trenches - potential quake triggers - running alongside its coast on both sides.

The last major quake registered a magnitude 7.7 in 1990 and killed nearly 2,000 people on the main northern island of Luzon.

A 7.1-magnitude earthquake set off by a local fault whipped up a tsunami that killed 78 people on Mindoro in 1994.