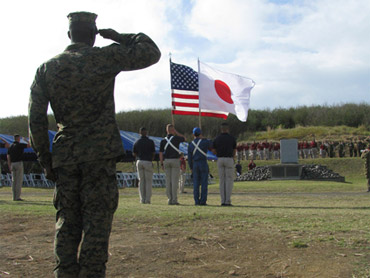 Hundreds of U.S. Marines landed on the remote island of Iwo Jima on Tuesday to prepare for the 65th anniversary of one of World War II's bloodiest and most iconic battles.

The Marines flew in trucks, water and food from Washington to support Wednesday's commemorations of the 1945 battle that was a turning point in the Pacific theater. It claimed 6,821 American and 21,570 Japanese lives in 36 days of intense fighting. A drill team also arrived on the island.

The commemoration was to be attended by about 1,000 people, including Marine Corps commandant Gen. James Conway, members of Japan's parliament and representatives of the Iwo Jima survivors' association.

Only about two dozen American veterans of the battle are expected to attend the "reunion of honor" ceremony because few of the survivors - now in their 80s and 90s - are able to make the trip.

It was not known if any of the fewer than 1,000 Japanese who survived the battle would be able to attend.

Inhabited only by about 300 Japanese troops, Iwo Jima, a tiny island the size of Manhattan, is a maze of tunnels, caves and dense, scraggly underbrush. It is believed to be covered with too much unexploded ordnance left over from the battle to be developed, and has been largely untouched since the war.

It is, instead, an open tomb.

Though dozens of remains are recovered every year, about 12,000 Japanese are still classified as missing in action and presumed killed on the island, along with 218 Americans.

The island formally reverted to its old name of "Iwo To" in 2006. Both "to" and "jima" mean island, but the name of "Iwo Jima" carries the stigma of the treacherous battle and subsequent two decades of occupation.

The Marines who arrived Tuesday from the 3rd Marine Expeditionary Force on the island of Okinawa, many of whom have been to battle either in Iraq or Afghanistan, said they were visiting hallowed ground.

"I can't imagine fighting in this kind of terrain," said Cpl. Daniel Flynn, 24, of Mount Airy, North Carolina. "I fought in Afghanistan, but that was in open desert. I probably would not have had the same experience here had I not been to Afghanistan."

(CBS)
Joined by Japanese troops and U.S. Navy sailors, many of the Marines trekked down to the beach where the invasion of the island began on Feb. 19, 1945, and filled bottles with its famous black volcanic sand. Others jogged to the top of Mount Suribachi, where the U.S. flag was raised on Feb. 23 - an image captured by AP photographer Joe Rosenthal that became one of the most enduring ever taken of war.

Iwo Jima was declared secured on March 26, 1945. Japan surrendered in August of that year.