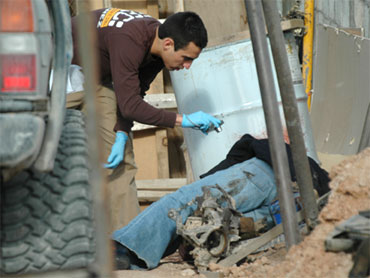 The bullet-riddled bodies of three men were inside a car left beside the highway between the resort communities of Acapulco and Zihuatanejo on Wednesday morning, police in the Pacific coast state of Guerrero said.

Police did not release the message left with the bodies, but said it referred to drug cartels.

Late Tuesday night, state police found the bodies of four young men in an abandoned car near a hotel in Guerrero's capital, Chilpancingo. A police report said the men appeared to have been asphyxiated by plastic tape covering their faces.

A written message left on the windshield accused them of betraying the brothers who lead the Beltran Leyva cartel, police said Wednesday.

In the neighboring west coast state of Michoacan, two gunmen and a police officer died in a clash early Wednesday, state prosecutors said.

Gunmen opened fire when police in Uruapan tried to stop their SUV just after 1 a.m. A grenade thrown by the attackers killed one policeman and wounded another. Hours later investigators found the bodies of two men believed to have been involved in the shootout.

In the northern city of Saltillo, a police officer's body was found in front of the same hotel where a slain newspaper reporter was dumped nearly two weeks ago.

Police were searching for the officer, Carlos Urbina, after he was reported abducted Tuesday, the Coahuila state attorney general's office said. Near midnight, officers found Urbina's body, his hands and feet bound and his face covered in plastic tape, in the trunk of a vehicle outside the Marbella Motel.

On Jan. 8, the body of reporter Valentin Valdes was left outside the same hotel, along with a threatening message. His regional newspaper, the Zocalo, promptly announced it would stop covering drug violence.

Valdes, 28, had written about the Dec. 29 arrest at the Marbella Motel of five alleged members of the Gulf drug cartel. He also covered the arrest of five others who barged into the same hotel and stole surveillance tapes.

Calderon launched a crackdown on drug cartels in 2006, deploying thousands of soldiers and federal police across Mexico. Since then, drug violence has killed more than 15,000 people throughout the country.