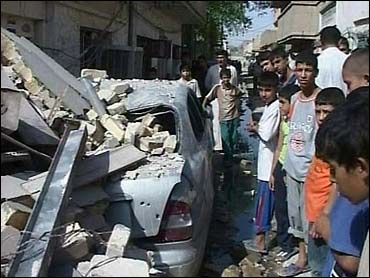 The U.S. death toll in Iraq has risen again.

U.S. military officials Friday announced the deaths of four U.S. Marines, in fighting in Anbar province, and separately, the deaths of three other American soldiers, members of Task Force Lightning, killed by a roadside bomb in Ninevah province.

All of the casualties were on Thursday, according to U.S. military officials who say the four Marines assigned to Multi National Force-West were killed while conducting combat operations in a predominantly Sunni area west of Baghdad that has seen a recent drop in violence.

President Bush, meanwhile, says he is confident of success in Iraq.

Speaking in Sydney, Australia, Friday to a business audience at the Asia-Pacific summit, President Bush said there has been progress in Anbar Province and it is being replicated elsewhere. Mr. Bush also said increasing security in Iraq creates conditions that allow reconciliation.

On Monday, the U.S. lead commander in Iraq, General David Petraeus, is to present a long-anticipated progress report to Congress. Previewing that, Petraeus tells the Boston Globe he'll recommend starting a gradual drawdown of U.S. forces in the spring, when the extra troops of the U.S. surge end their current tours.

The number of U.S. troops in Iraq has climbed to a record high of 168,000, and is moving toward a peak of 172,000 in the coming weeks - a level that could extend into December, a senior military official said Thursday.

Maj. Gen. Richard Sherlock, director of operations for the Joint Chiefs of Staff, said the increase is the result of troop rotations, as several brigades overlap while they move in and out of the war zone. Previously officials had predicted the number could go up to about 171,000.

Early Thursday in Baghdad, U.S. and Iraqi troops backed by attack aircraft clashed with suspected Shiite militiamen, bombing houses in pre-dawn raids and battling more than a dozen snipers on rooftops. Residents and police said at least 14 people were killed.

The fighting occurred in a Mahdi Army stronghold of anti-American Shiite cleric Muqtada al-Sadr, who had ordered his militia not to carry out any more attacks for up to six months. The U.S. military stressed the raid targeted breakaway factions that remain violent partly as a way of bullying minority Sunnis out of Baghdad.

The clashes reinforced the obstacles to U.S. goals posed by the increasingly volatile Shiite militias amid signs that infighting within Iraq's dominant religious sect is on the rise, just days before a key progress report in Washington on the war.

"The Iraqi parties are quarreling over power and the people are dying," said one Baghdad resident, standing next to a hole in his roof and waving a piece of shrapnel he found after Thursday's raid. "We are fed up."

Video from APTN shows houses with their roofs caved in, and others completely destroyed.

Bombings, shootings and mortar attacks left at least 28 Iraqis dead nationwide, including 18 bullet-riddled bodies that turned up in Baghdad and south of the capital - apparent victims of so-called sectarian death squads usually run by militia fighters.

After a period of relative calm, recent days have seen an uptick in violence.

The Iraqi government, meanwhile, called a critical independent U.S. assessment of its security posture unacceptable interference in its affairs.

The study, released Wednesday and led by retired Marine Corps Gen. James Jones, found that Iraq's security forces will be unable to take control of the country in the next 18 months. It said the Iraqi National Police is so rife with corruption it should be scrapped entirely.

The assessment is expected to factor heavily into Congress' debate on the war, with U.S. Ambassador Ryan Crocker and top commander Gen. Petraeus due to begin hearings on Monday.

Yassin Majid, an adviser to Prime Minister Nouri al-Maliki, said "it is not the duty of the independent committee to ask for changes at the Interior Ministry, especially when it comes to security apparatus."

"This is an Iraqi affair, and we will not accept interference by anyone in such work, whether the Congress or others," Majid told The Associated Press by telephone. "The report is inaccurate and not official and we consider it interference in our internal affairs."

Majid also stressed that al-Maliki's government had fired some members of security agencies over corruption charges and links to militias and had extended that policy to other agencies.

"The al-Maliki government will do this with all state agencies. We will not take dictation from reports," he said.

Last week, al-Sadr said he ordered his Mahdi Army to halt all attacks to give him time to restructure the militia. The announcement appeared aimed at distancing himself from suspected Iranian-backed factions he can no longer control.

The U.S. military has welcomed the Mahdi Army cease-fire but kept up operations targeting what it calls rogue elements of the militia that it says are continuing violence, including attacks on U.S. and Iraqi forces.

"The multinational force continues to stand with the government of Iraq in welcoming the commitment by Muqtada al-Sadr to stop attacks by his followers," the military said in a statement on Thursday's raid. "However, a few attacks on coalition forces and innocent Iraqis have continued. Our assumption is that these groups are not honoring Sadr's orders and thus will not be subject to the restraint we have observed for those who are responding to Sadr's orders."

The operation in the western Baghdad area of Washash involved Iraqi and U.S. special forces acting on a tip against a Shiite cell accused of attacking local police and engaging in extortion as well as execution-style killings of Sunnis, the military said.

The troops called for air strikes after coming under fire from more than a dozen snipers on the rooftops of surrounding buildings.

Residents reported hearing explosions at about 3 a.m. that persisted for nearly an hour.

A police officer, speaking on condition of anonymity for his own safety, said U.S. helicopters had attacked the area, killing 14 civilians and wounding 10. There was confusion at the scene, however, as some residents said they thought it had been a mortar attack and said 27 people had been killed.