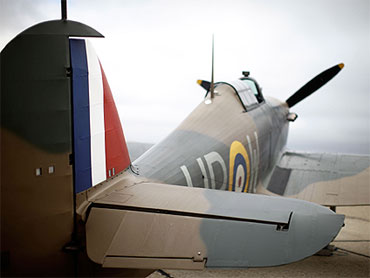 In the words of Winston Churchill, it was Britain's "finest hour," a turning point in world history - though it didn't always feel that way at the time.

Seventy years after the Battle of Britain, Churchill's daughter commemorated the pivotal air campaign Friday alongside surviving members of "the few," the Royal Air Force pilots who defied the odds to defend the country from German attack.

One of them is Nigel Rose, now a 92-year-old retired quantity surveyor, then a newly trained Spitfire pilot battling German bombers over England's south coast.

"I don't think one realized that this scrap that we were having would have a startling effect on the progress of events, and possibly help stop the impending invasion," Rose said.

Between July and October 1940, RAF fighter squadrons fought Luftwaffe bombers that pounded Britain's cities and airfields as preparation for a planned invasion.

Of 2,900 British and Allied airmen who took part, more than 500 were killed. But Germany's failure to defeat the young, undertrained and outnumbered RAF crews and conquer Britain's skies helped save the country from Nazi occupation.

Friday marks the 70th anniversary of Churchill's rousing House of Commons speech of Aug. 20, 1940, in which the prime minister said of the air crews that "never in the field of human conflict was so much owed by so many to so few."

Actor Robert Hardy read the speech Friday outside Churchill's wartime headquarters, at a ceremony attended by Churchill's daughter Lady Mary Soames, wartime singer Vera Lynn and some of the dwindling band of Battle of Britain veterans - now only about 100 strong. The ceremony was being followed by a fly over of World War II Spitfire and Hurricane fighters.

The "few" speech was one of several stirring addresses by Churchill that helped galvanize British resolve in the darkest days of the war. In May 1940, he vowed to fight the Nazis with "blood, toil, tears and sweat."

After France fell to German invaders the next month, Churchill told lawmakers that "the Battle of France is over. I expect that the Battle of Britain is about to begin" and urged his country to fight so that "if the British Empire and its Commonwealth last for 1,000 years, men will still say, 'This was their finest hour."'

Phil Reed, director of the Churchill War Rooms, said the August speech epitomized Churchill's "ability to capture in the most stirring way the spirit of a nation fighting for its existence."

"Now part of the general folklore of the battle, the speech is today considered a defining moment of the conflict and one of Churchill's most emotive and stirring pronouncements."

"The few" are even fewer now - men in their 90s, for whom those days are still vivid. Then, many were barely out of their teens and rushed into battle without full training. Rose had never even seen a German plane before when he was sent into combat in the summer of 1940.

"When we suddenly saw 100 or more at once silhouetted against a white cloud - it was pretty impressive," Rose said.

"We arrived on a day when there had been a hell of a battle going on. We were relieving Hurricanes and there was one upside down in the middle of the air field."

Over the next few months, Rose and his comrades were scrambled again and again to fight off waves of German bombers. Rose was wounded in September 1940 but later returned to flying.

He said the pilots were usually too busy to worry about death, and too absorbed to dwell on the historic nature of their struggle.

"One read about Churchill's speeches, but I don't think one realized that this was a nodal point in the war generally," Rose said. "There were times when you were really frightened, without a doubt. But there wasn't much time to be really scared in the air."

"And if somebody was missing, you really didn't have time to mope. There was always a chance that if he'd bailed out and landed upcountry somewhere, someone would ferry him back," he said. "A chap who was missing when you landed from a fight, you might see him the next day - or you might not."