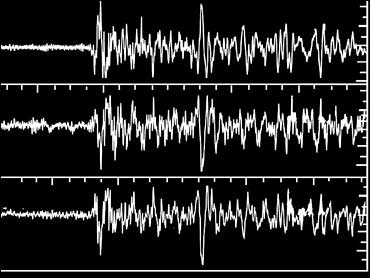 A violent earthquake slammed a remote area of Alaska's interior and delivered a jolt so strong that it created giant waves on lakes and ponds around the continent. The magnitude 7.9 quake was one of the strongest ever recorded in the United States.

The quake, centered on the Denali Fault 90 miles south of Fairbanks, struck Sunday at 1:13 p.m. Alaska Standard Time — its effects strongly felt in Anchorage about 270 miles to the south.

"It shook so bad you could not stand up on the front porch," said Jay Capps, a grocery store owner between Tok and Glennallen in the southeastern part of the state. "It sounded like the trees were breaking roots under the ground."

Only one minor injury was reported, but the quake did considerable damage to Alaska's infrastructure. The temblor opened 6-foot cracks in highways and roads, shook homes and damaged supports to the Trans-Alaska Pipeline.

Officials manually shut down the pipeline after the quake, and the line was still out of service Monday. The oil flow can be manually stopped for maintenance or other reasons without affecting oil deliveries.

The quake created a ripple effect thousands of miles away — from the bayous of Louisiana to lakes in the Seattle area.

In the New Orleans area — more than 3,000 miles away — residents saw water slosh about as a result of the quake's awesome power. On Seattle's Lake Union — more than 1,400 miles south — waves shook some houseboats loose from their moorings and some slammed into docks.

In Mandeville, La., Carol Barcia, 47, saw boats bounce around from the deck of her house.

"One poor guy across the canal from us fell off his sail boat," she said.

Experts say such an effect is common during powerful quakes.

"This earthquake was shallow and the energy went directly into the surface and that is what causes these effects so far away," said Dale Grant, a geophysicist with U.S. Geological Survey's National Earthquake Information Center in Golden, Colo.

Bruce Turner of the West Coast and Alaska Tsunami Warning Center said the earthquake did not generate a tsunami.

Numerous roads developed wide cracks, including the Alaska Highway near Northway, about 250 miles southeast of Fairbanks.

The Richardson Highway, which parallels the pipeline between Valdez and Fairbanks, was closed near Paxson after gaps opened that were 2-to-6 foot wide and 5 feet deep, Wilkinson said. About 20 miles north, the ground on one side of the highway had dropped more than 2 feet.

The worst reports of damage were along a two-mile stretch of the Tok Cutoff, where numerous rock slides and hundreds of yards of 6-foot openings in the road could be seen.

Fuel tanks were knocked over in Slana, a village with no electric utility; families use diesel fuel to power generators.

Randy Schmoker, a metal worker in Porcupine Creek, was in his shop when he felt the ground move.

"I thought, 'Oh good, an earthquake,' and then it got worse and worse," he said.

Mike Heatwole, spokesman for the Alyeska Pipeline Service Co., said officials would know by midmorning Monday how long it will take to restart the pipeline. He did not know whether North Slope crude oil deliveries would be disrupted.

"On any given day, we located about 50 earthquakes throughout the world," Person said. "This to us is pretty normal."