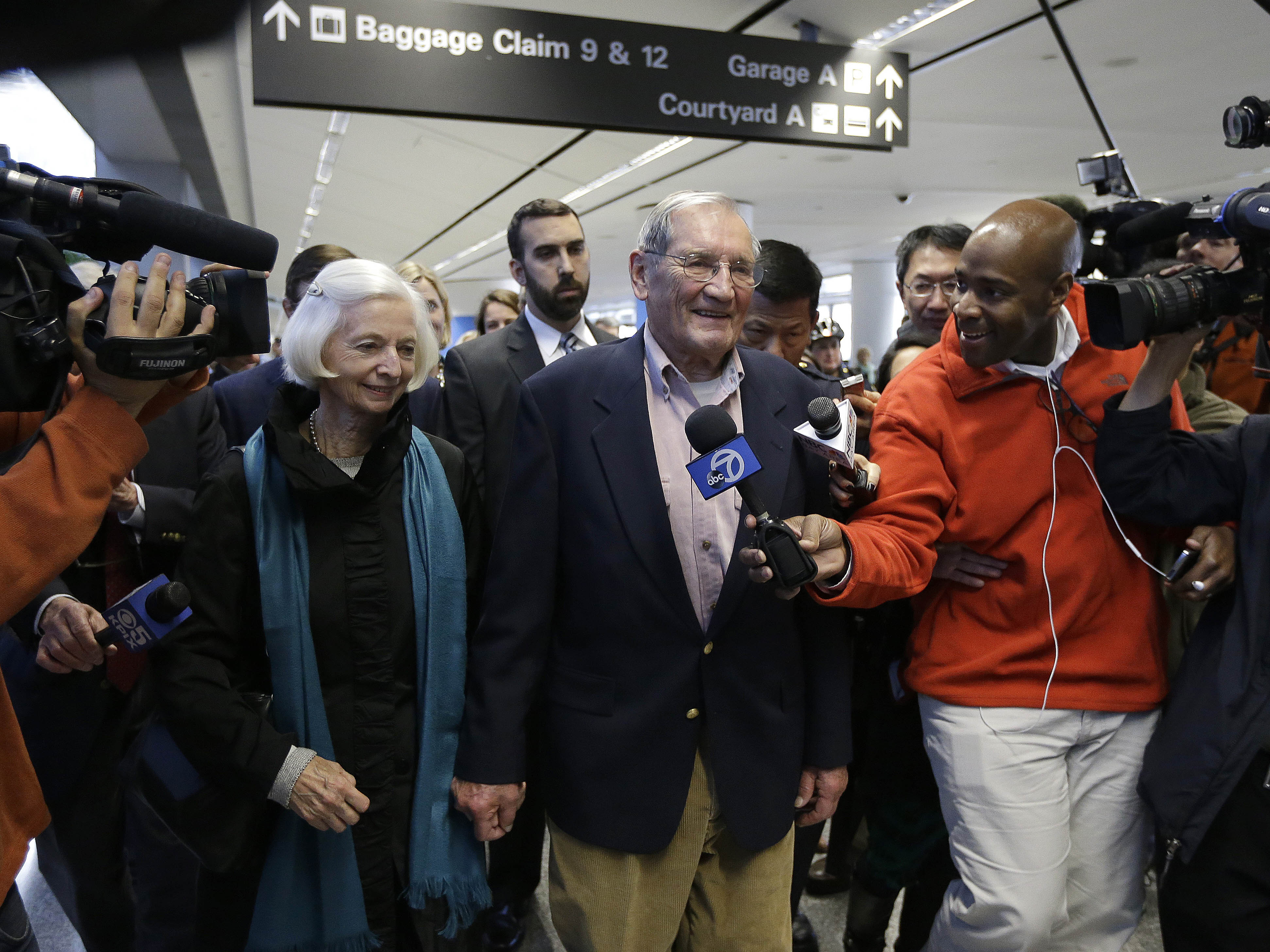 SAN FRANCISCO -Merrill Newman was tired and looking forward to reuniting with his family, but he was all smiles Saturday after arriving at the San Francisco airport after being detained for several weeks in North Korea.

The 85-year-old U.S. veteran of the Korean War held the hand of his wife and was accompanied by his adult son when he briefly addressed the assembled media after disembarking from a direct flight from Beijing.

"I'm delighted to be home," he said. "It's been a great homecoming. I'm tired, but ready to be with my family."

He also thanked the Swedish Embassy in Pyongyang, North Korea, and U.S. Embassy in Beijing for helping to secure his release. He declined to answer any questions and didn't discuss his headline-grabbing captivity.

Newman was detained in late October at the end of a 10-day trip to North Korea, a visit that came six decades after he oversaw a group of South Korean wartime guerrillas during the 1950-53 war.

Last month, Newman read from an awkwardly worded alleged confession that apologized for, among other things, killing North Koreans during the war. Analysts questioned whether the statement was coerced, and former South Korean guerrillas who had worked with Newman and fought behind enemy lines during the war disputed some of the details.

North Korea cited Newman's age and medical condition in allowing him to leave the country.

Earlier Saturday, a smiling Newman told reporters in Beijing that he felt good and was glad to be on his way home.

"And I appreciate the tolerance the (North Korean) government has given to me to be on my way," he said after arriving at the airport in Beijing from Pyongyang, adding that he looked forward to seeing his wife.

Newman's detention highlighted the extreme sensitivity with which Pyongyang views the war, which ended without a formal peace treaty, leaving the Korean Peninsula still technically in a state of war. The conflict is a regular focus of North Korean propaganda and media, which accuse Pyongyang's wartime enemies Washington and Seoul of carrying on the fighting by continuing to push for the North's overthrow.

The televised statement read last month by Newman said he was attempting to meet surviving guerrilla fighters he had trained during the conflict so he could reconnect them with their wartime colleagues living in South Korea, and that he had criticized the North during his recent trip.

Members of the former South Korean guerrilla group said in an interview last week with The Associated Press that Newman was their adviser. Some have expressed surprise that Newman would take the risk of visiting North Korea given his association with their group, which is still remembered with keen hatred in the North. Others were amazed Pyongyang still considered Newman a threat.

Newman's son, Jeffrey, said he spoke briefly with his father from Beijing and that he was "in excellent spirits and eager to be reunited with his family."

"As you can imagine this has been a very difficult ordeal for us as a family, and particularly for him," he said in a statement read outside his home in Pasadena Friday night, adding that they will say more about this unusual journey after Newman has rested.

Newman's release comes as U.S. Vice President Joe Biden visit to the region brought him to Seoul. Biden said Saturday that he welcomed the release and said he talked by phone with Newman in Beijing, offering him a ride home on Air Force Two.