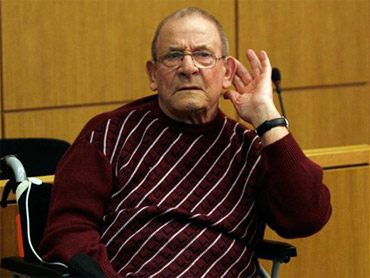 A German court on Tuesday convicted an 88-year-old man of murdering three Dutch civilians as part of a Nazi hit squad during World War II, capping six decades of efforts to bring the former Waffen SS man to justice.

Heinrich Boere, No. 6 on the Simon Wiesenthal Center's list of most-wanted Nazis, was given the maximum sentence of life in prison for the 1944 killings.

"These were murders that could hardly be outdone in terms of baseness and cowardice - beyond the respectability of any soldier," presiding judge Gerd Nohl said.

Boere sat in his wheelchair, staring at the floor and showing no visible reaction as the verdict was announced.

During the trial, which began in October, Boere admitted killing a bicycle shop owner, a pharmacist and another civilian in 1944 as a member of the "Silbertanne" hit squad - a unit of largely Dutch SS volunteers responsible for reprisal killings of their countrymen.

He said he had no choice but to follow orders to carry out the killings.

"As a simple soldier, I learned to carry out orders," Boere testified in December.

"And I knew that if I didn't carry out my orders I would be breaking my oath and would be shot myself."

But the prosecution argued that Boere was a willing member of the fanatical Waffen SS, which he joined shortly after the Nazis had overrun his hometown of Maastricht and the rest of the Netherlands in 1940.

Though sentenced to death in absentia in the Netherlands in 1949 - later commuted to life imprisonment - Boere has managed to avoid jail until now.

One German court refused to extradite him because it ruled he might have German nationality as well as Dutch. Another would not force him to serve his Dutch sentence in a German prison because he was absent from his trial, having fled to Germany.

"We welcome the conviction, we welcome the sentence and this is again another proof that even at this point it is possible to bring Nazi war criminals to justice," Efraim Zuroff, the top Nazi hunter at the Simon Wiesenthal Center, said by telephone from Jerusalem.

"It also underscores the significance of the renewed activity on the part of the German prosecution," he said.

"I'm happy that the judge made a good decision," he said.

Defense lawyer Gordon Christiansen said he would appeal to a German federal court. Boere will remain free until the appeals process is complete.

Boere was born in Eschweiler, Germany - on the outskirts of Aachen, where he lives today. The son of a Dutch man and a German woman, he moved to the Netherlands when he was an infant.

Boere has testified that he decided to join the SS at age 18 after the Germans had overrun the Netherlands and he saw a recruiting poster signed by Heinrich Himmler that inspired him.

After fighting on the Russian front, Boere ended up back in the Netherlands as part of "Silbertanne" - a death squad believed to be responsible for 54 killings in Holland.