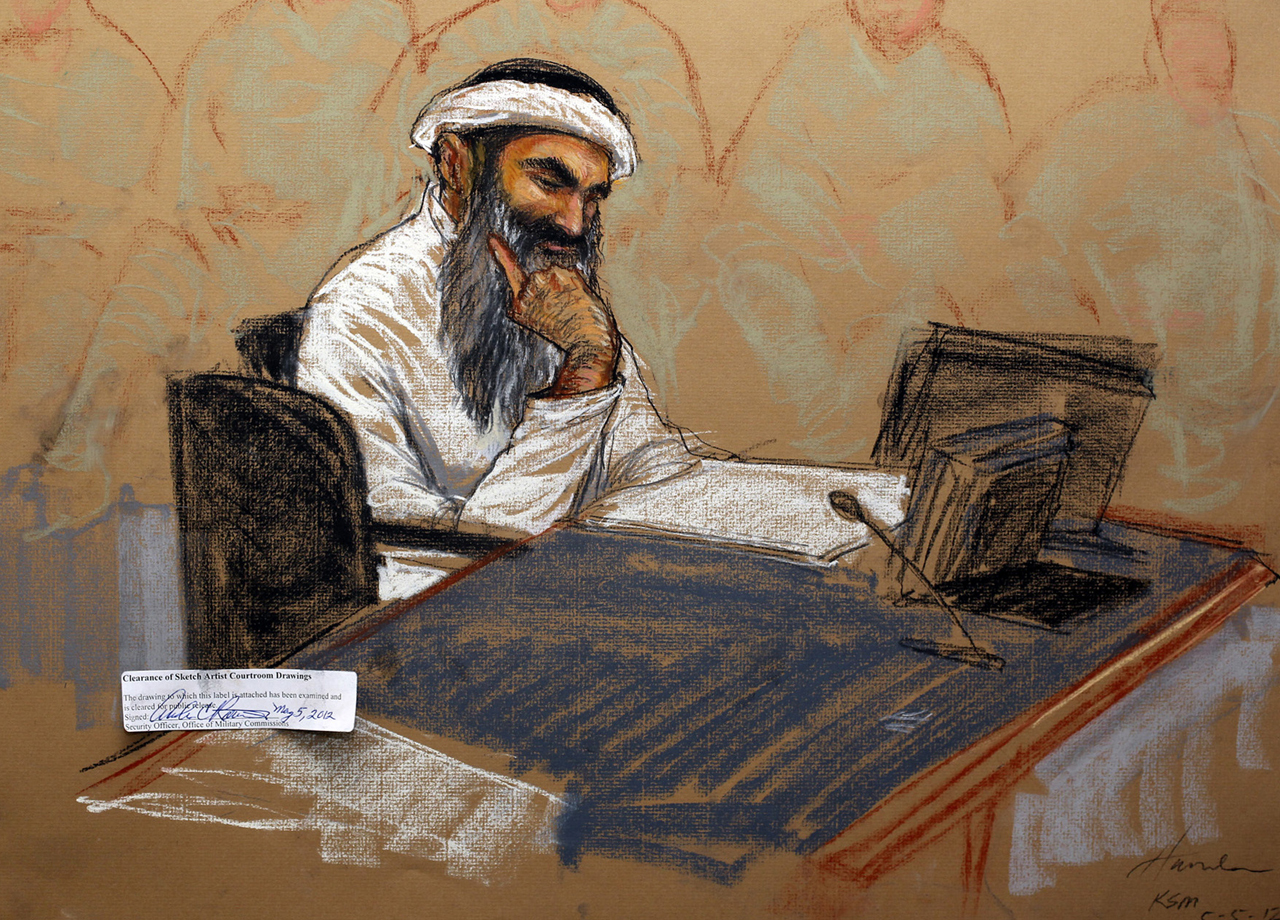 (CBS/AP) GUANTANAMO BAY NAVAL BASE, Cuba - The self-proclaimed mastermind of the Sept. 11 attacks and four accused co-conspirators appeared in public for the first time in more than three years Saturday, when U.S. officials started a second attempt at what is likely to be a drawn out legal battle that could lead to the men's executions.

Khalid Sheikh Mohammed and his co-defendants were being arraigned at a military tribunal at Guantanamo Bay on charges that include that include 2,976 counts of murder for the worst terrorist attack on U.S. soil.

The hearing quickly bogged down before they could be arraigned. One prisoner, Walid bin Attash was put in a restraint chair for unspecified reasons, and lawyers for all defendants complained that the prisoners were prevented from wearing the civilian clothes of their choice.

Mohammed refused to respond to questions, removing his earphone and sitting in silence. His civilian lawyer, David Nevin, said he believed Mohammed was not responding because he believes the tribunal is unfair.

The judge, Army Col. James Pohl, warned that he would not permit defendants to block the hearing and would continue without his participation.

"One cannot choose not to participate and frustrate the normal course of business," Pohl said. "If he refuses to put the earphones in, then he is choosing to become uniformed."

The judge then entered a "not guilty" plea for Mohammed.

When asked if they wanted to keep their counsel, all the defendants refused to answer question or to even look at the judge. Several read the Koran and fingered prayer beads; some just stared of into the middle distance.

Attash's attorney, Cheryl Borman, is wearing an Arabic-styled outfit that covers everything but her face. She accused a woman on the government's side of wearing an inappropriate outfit. "We ask there be discretion in wearing clothing appropriate for a courtroom session," she said, claiming that her client might be forced into "committing a sin" if he were to look at an inappropriately-attired female.

(For the record, the female attorneys are wearing Navy Service Dress Blue uniforms, which feature a skirt just below the knee and long sleeves.)

The chief prosecutor, Army Brig Gen. Mark Martins, responded that everyone on his side of the room was qualified to be there and was acting appropriately. This prompted David Nevin, the attorney for Mohammed, to demand all those attending on the government's side identify themselves.

"Considering what Mr Mohammed has been through, the presence of unknown, shadowy people [is] unnerving," he said.

Judge Pohl noted the complaint, but elected to continue.

Defendant Ramzi Binalshibh then began to loudly complain about the treatment of all the defendants. His microphone was not on for most of his outburst, but reporters heard him tell the judge he was being treated so poorly that he might die.

"Maybe they are going to kill us and say that we are committing suicide," he said. The judge then told him he had the right to make a complaint about conditions at the camp, but this was not the time.

In the past, during the failed first effort to prosecute them at the U.S. base in Cuba, Mohammed has mocked the tribunal and said he and his co-defendants would plead guilty and welcome execution. But there were signs that at least some of the defense teams were preparing for a lengthy fight, planning challenges of the military tribunals and the secrecy that shrouds the case.

The arraignment is "only the beginning of a trial that will take years to complete, followed by years of appellate review," attorney James Connell, who represents defendant Ali Abd al-Aziz Ali, told reporters gathered at the base to observe the hearing.

"I can't imagine any scenario where this thing gets wrapped up in six months," Connell said.

Defendants in what is known as a military commission typically do not enter a plea during their arraignment. Instead, the judge reads the charges, makes sure the accused understand their rights and then moves on to procedural issues. Lawyers for the men said they were prohibited by secrecy rules from disclosing the intentions of their clients.

Jim Harrington, a civilian attorney for Ramzi Binalshibh, a Yemeni prisoner who has said at one hearing that he was proud of the Sept. 11 attacks, said he did not think that any of the defendants would plead guilty, notwithstanding their earlier statements.

Army Capt. Jason Wright, one of Mohammed's Pentagon-appointed lawyers, declined to comment on the case.

Family members at Guantanamo said they were grateful for the chance to see a case they believe has been delayed too long.

Cliff Russell, whose firefighter brother Stephen died responding to the World Trade Center, said he hoped the case would end with the death penalty for the five Guantanamo Prisoners.

"I'm not looking forward to ending someone else's life and taking satisfaction in it, but it's the most disgusting, hateful, awful thing I ever could think of if you think about what was perpetrated," Russell said.

Suzanne Sisolak of Brooklyn, whose husband Joseph was killed in his office in the trade center's north tower, said she is not concerned about the ultimate outcome as long as the case moves forward and the five prisoners do not go free.

"They can put them in prison for life. They can execute them," Sisolak said. "What I do care about is that this does not happen again. They need to be stopped. That's what I care about because nobody deserves to have this happen to them."

The arraignment for the five comes more than three years after President Barack Obama's failed effort to try the suspects in a federal civilian court and close the prison at the U.S. base in Cuba.

Attorney General Eric Holder announced in 2009 that Mohammed and his co-defendants would be tried blocks from the site of the destroyed trade center in downtown Manhattan, but the plan was shelved after New York officials cited huge costs to secure the neighborhood and family opposition to trying the suspects in the U.S.

Congress then blocked the transfer of any prisoners from Guantanamo to the U.S., forcing the Obama administration to refile the charges under a reformed military commission system.

New rules adopted by Congress and Obama forbid the use of testimony obtained through cruel treatment or torture. Gen. Mark Martins, the chief prosecutor, said the commission provides many of the same protections that defendants would get in civilian court. "I'm confident that this court can achieve justice and fairness," he said.

But human rights groups and the defense lawyers say the reforms have not gone far enough and that restrictions on legal mail and the overall secret nature of Guantanamo and the commissions makes it impossible to provide an adequate defense.

They argue that the U.S. has sought to keep the case in the military commission to prevent disclosure of the harsh treatment of prisoners such as Mohammed, who was waterboarded 183 times and subjected to other measures that some have called torture.

Mohammed, a Pakistani citizen who grew up in Kuwait and attended college in Greensboro, North Carolina, has admitted to military authorities that he was responsible for the Sept. 11 attacks "from A to Z," as well as about 30 other plots, and that he personally killed Wall Street Journal reporter Daniel Pearl. Mohammed was captured in 2003 in Pakistan.

His four co-defendants include Binalshibh, a Yemeni, who was allegedly chosen to be a hijacker but couldn't get a U.S. visa and ended up providing assistance such as finding flight schools; Waleed bin Attash, also from Yemen, who allegedly ran an al Qaeda training camp in Afghanistan and researched flight simulators and timetables; Mustafa Ahmad al-Hawsawi, a Saudi accused of helping the hijackers with money, Western clothing, traveler's checks and credit cards; and al-Aziz Ali, a Pakistani national and nephew of Mohammed, who allegedly provided money to the hijackers.