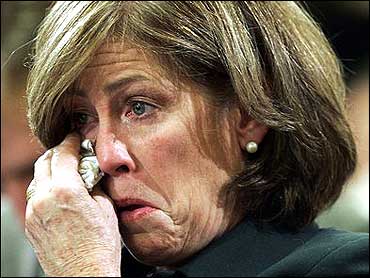 Since September 11, taxpayers have spent tens of billions of dollars to secure airports, harbors and cities and to better prepare first responders.

But in a scathing final report Monday, the former 9/11 commission warned that the U.S. remains at great risk to another terrorist attack.

The panel cited disjointed airplane passenger screening methods, pork-barrel security funding and other problems in saying the Bush administration and Congress had not moved quickly enough to enact the majority of its recommendations of July 2004.

"We're frustrated, all of us — frustrated at the lack of urgency in addressing these various problems," said Thomas Kean, a Republican and former New Jersey governor who was chairman of the commission.

"We shouldn't need another wake-up call," Kean said Monday. "We believe that the terrorists will strike again; so does every responsible expert that we have talked to. And if they do, and these reforms that might have prevented such an attack have not been implemented, what will our excuse be?"

Rather than disbanding like most federally appointed commissions when their terms expire, Kean and the other nine commissioners continued their work as a private entity called the 9/11 Public Discourse Project.

In what they say is their final assessment of the government's counterterror performance, panel members gave failing "F" grades in five areas, and issued only one "A" — actually an A-minus — for the Bush administration's efforts to curb terrorist financing.

White House spokesman Scott McClellan related the commission's findings to the administration's campaign in Iraq, saying, "By taking the fight to the enemy abroad, and by doing so, that is keeping them from plotting and planning to attack inside America."

The White House later released a 17-point fact sheet noting its support for the commission and some of its recommendations that have been enacted so far, including the creation of a national intelligence director and a counterterror center to analyze threat information from federal agencies.

Congress established the commission in 2002 to investigate government missteps that led to the attacks of Sept. 11, 2001. Nearly 3,000 people were killed when 19 hijackers organized by al Qaeda flew airliners into New York City's World Trade Center and the Pentagon and caused a crash in the Pennsylvania countryside.

The panel's 567-page final report, which became a national best seller, did not blame Mr. Bush or former President Clinton for missteps contributing to the attacks but did say they failed to make anti-terrorism a higher priority.

On Capitol Hill, Republican and Democratic lawmakers alike agreed that Congress has not done enough to shore up security.

"Our political leadership is distracted," said Roemer. "They're not focused on the right kind of issues for our country. This is not a partisan issue. A Republican White House shouldn't be blaming a Republican congress. Democrats shouldn't be blaming Republicans for this. This is American security values and we've got some answers here. If Congress doesn't like those answers, if the White House doesn't like those, come up with your own, but do something to better protect this country. We know al Qaeda is coming at us again."

Many lawmakers focused on the security funding formula to states — an annual fight between the House and the Senate.

Sen. John Cornyn, a Texas Republican, said, "Every penny should be directed where it will do the most good, in other words, the places across our nation where terrorists may strike."

In New York, Mayor Michael Bloomberg reiterated his call for a more streamlined command procedure in the city, where the police would take over during major disasters.

"We do train together, we do work together," Bloomberg said. "But I think we have to go and, in advance, solve some of the kinds of problems that would arise if there were a major incident."

Mary Fetchet, director of the Voices of Sept. 11 advocacy group, told The Early Show co-anchor Harry Smith that she was "sad and frustrated, truthfully, that almost five years later, our country is not much safer. I appreciate that some reforms have been actually implemented, but we have so far to go. And how can we afford really not to make this a priority?"

Asked if she feels any safer than before 9/11, Fetchet, whose son died in the World Trade Center, said, "Well, I don't. And after losing a son – I have two other children. This problem is not going to go away. It has to be a priority, the safety of our families and our country. And we're depending upon the executive branch, Congress and these government agencies to move these reforms forward."