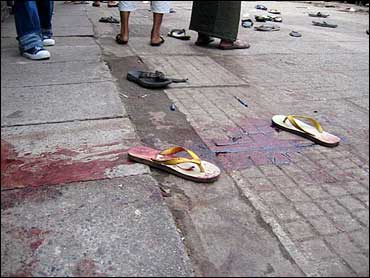 At least nine people, including a Japanese video journalist, were killed and 11 injured Thursday as soldiers in Myanmar opened fire upon tens of thousands of anti-government protesters who defied a government crackdown, the government said.

Witnesses and a Western diplomat told The Associated Press that dozens of people were arrested and severely beaten after soldiers fired into a crowd in Yangon. Troops in at least four locations fired into the crowds after several thousand protesters ignored an order from security forces to disband, witnesses and diplomats said.

Mark Canning, the British Ambassador to Myanmar, spoke to CBS News correspondent Barry Peterson about what he witnessed.

"There were a number of violent incidents. There was a shooting outside one of the main hotels," Canning said. "We understand from one of our staff who was in the hotel at the time that a number of people were hit."

Thursday President Bush said America stood in solidarity with the people of Myanmar who are protesting against that nation's military government, and called on countries with influence on the ruling junta to demand the army end violence against protestors.

"Every civilized nation has a responsibility to stand up for people suffering under a brutal military regime like the one that has ruled Burma for too long," Mr. Bush said in a statement read by White House spokesperson Dana Perino.

"I call on those who embrace the values of human rights and freedom to support the legitimate demands of the Burmese people," Mr. Bush said. [It is U.S. policy to refer to the country by its original name of Burma, rather than the name adopted by the current regime.]

The statement comes as the administration announces it is imposing economic sanctions against 14 senior officials of Myanmar's government, including the junta leader, Senior Gen. Than Shwe, and the No. 2 man, Deputy Senior Gen. Maung Aye. The action freezes any assets the 14 have in U.S. banks or other financial institutions under U.S. jurisdiction, and also prohibits any U.S. citizens from doing business with them.

The reactions came on a bloody day in Yangon, where an estimated 70,000 anti-government demonstrators had gathered Thursday. Thousands of protesters ran through the streets amidst gunfire from government troops, bloody sandals left in their wake.

Protesters had shouted at the soldiers, angry about early morning raids by security forces on Buddhist monasteries during which soldiers reportedly beat up and arrested more than 100 monks. "Give us freedom," they shouted.

Southeast Asian nations on Thursday expressed "revulsion" to Myanmar's foreign minister at the violent repression of demonstrations and strongly urged the military government "to exercise utmost restraint and seek a political solution."

A statement issued after a foreign ministers meeting of the Association of Southeast Asian Nations said the ministers "were appalled to receive reports of automatic weapons being used and demanded that the Myanmar government immediately desist from the use of violence against demonstrators."

The meeting of the eight-nation group, known as ASEAN, on the sidelines of the U.N. General Assembly's ministerial meeting, took place as the U.N. special envoy to Myanmar, Ibrahim Gambari, was flying to Bangkok at Secretary-General Ban Ki-moon's request to try to promote a political solution and reconciliation efforts.

Gambari took off for Bangkok not knowing whether Myanmar's government would grant him a visa. U.N. deputy spokeswoman Marie Okabe announced early Thursday afternoon that Ban had been informed by Myanmar's Foreign Minister Nyan Win that Gambari "will be welcomed by the Myanmar government."

The ASEAN foreign ministers said Myanmar's minister assured them Gambari would be issued a visa and they urged Myanmar's government "to grant him full access to all parties ... as they had done in the past." Gambari has held two meetings with pro-democracy leader Aung San Suu Kyi, who is under house arrest.

CBS News White House corresponddent Mark Knoller reports that today President Bush met with Chinese Foreign Minister Yang Jiechi, during which he thanked Minister Yang for China's assistance in facilitating the U.N.'s special envoy's visit to Burma, and asked that China use its influence in the region to help bring a peaceful transition to democracy in Burma.

China, which has come under increasing pressure to use its regional influence on Myanmar's ruling junta, issued an evenhanded plea for calm on Thursday after refusing to condemn the military-run government at the United Nations.

Chinese Foreign Ministry spokeswoman Jiang Yu said at a media briefing in Beijing on Thursday that "China hopes that all parties in Myanmar exercise restraint and properly handle the current issue so as to ensure the situation there does not escalate and get complicated."

The crackdown puts China in a bind. Its communist government has developed close diplomatic ties with junta leaders and is a major investor in Myanmar. But with the Beijing Olympics less than a year away, China is eager to fend off criticism that it shelters unpopular or abusive regimes.

"I perceive a little movement coming from the Chinese government and the Chinese people," Kouchner said. "But they are certainly, apart from the other ASEAN nations, they are really those who can do something to influence the behavior of the Myanmar government."

"We have a slow process facing an emergency situation," he said.

Earlier Thursday, a monk at Ngwe Kyar Yan monastery pointed to bloodstains on the concrete floor and said a number of monks were beaten and at least 100 of its 150 monks taken away in vehicles. Shots were fired in the air and tear gas was used against a crowd of about 1,500 supporters of the monks during the chaotic raid, he said.

"Soldiers slammed the monastery gate with the car, breaking the lock and forcing it into the monastery," said the monk, who did not give his name for fear of reprisals. "They smashed the doors down, broke windows and furniture. When monks resisted, they shot at the monks and used tear gas and beat up the monks and dragged them into trucks."

A female lay disciple said a number of monks also were arrested at the Moe Gaung monastery, which was being guarded by soldiers. Both monasteries are located in Yangon's northern suburbs.

Kenji Nagai, 50, a journalist covering the protests in Yangon for Japanese video news agency APF News, was confirmed as one of the dead after his father and company representative identified him in a photo taken at the scene of his death by a photographer who was also covering the protests.

Japan's new foreign minister said Thursday that his country holds Myanmar accountable for the death of Japanese journalist killed during violent protests in the military-led country.

After a private meeting with U.S. Secretary of State Condoleezza Rice, Foreign Minister Masahiko Komura told reporters at the State Department that his ministry had called Myanmar's Embassy in Tokyo to raise the issue.

In Mandalay, the country's second-largest city, about 430 miles north of Yangon, five army trucks with soldiers and three fire trucks were seen driving into the Mahamuni Pagoda, where hundreds of monks were locked inside by security forces.

Another 60 soldiers blocked the road to the pagoda from the center of the city.

Led by thousands of monks in maroon robes, protesters have been demanding more democratic freedoms, the release of political activists and economic reforms in the impoverished nation. The protests, which began Aug. 19, were initially sparked by high fuel prices but have been swelled by pent-up opposition to harsh military rule.

Myanmar's state-run newspaper on Thursday blamed "saboteurs inside and outside the nation" for causing the protests in Yangon, and said the demonstrations were much smaller than the foreign media were reporting.

"Saboteurs from inside and outside the nation and some foreign radio stations, who are jealous of national peace and development, have been making instigative acts through lies to cause internal
instability and civil commotion," the government's New Light of Myanmar newspaper said.

An Asian diplomat who spoke on condition of anonymity told The Associated Press that Nobel Peace Prize laureate Suu Kyi remained at her Yangon residence, where she has been held under house arrest for much of the past 18 years. Rumors had circulated that she had been taken away to Yangon's notorious Insein prison.

The diplomat said the junta had deployed more security forces around Suu Kyi's house and on the road leading to it, and that more than 100 soldiers were now inside the compound.

Dramatic images of the recent protests, many transmitted by dissidents using cell phones and the Internet, have riveted world attention on the escalating faceoff between the military regime and
its opponents.

The United States called Thursday on Myanmar's military leaders to open a dialogue with the protesters and urged China, Myanmar's main economic and political ally, to use its influence to prevent further bloodshed.

"We all need to agree on the fact that the Burmese government has got to stop thinking that this can be solved by police and military, and start thinking about the need for genuine reconciliation with the broad spectrum of political activists in the country," U.S. Assistant Secretary of State Christopher Hill said in Beijing.

U.N. Secretary-General Ban Ki-moon planned to send a special envoy and urged the junta "to exercise utmost restraint toward the peaceful demonstrations taking place, as such action can only undermine the prospects for peace, prosperity and stability in Myanmar."

On Wednesday, security forces in Myanmar opened fire on demonstrators, and witnesses said police beat and dragged away dozens of Buddhist monks.

A news bulletin on Myanmar's state television, which is controlled by the ruling military junta, said one protester had been killed and three injured in the demonstrations that had also resulted in eight police officers being hurt.

The bulletin said Buddhist monks had forced people to take part in the recent protests and called on the public to make complaints to authorities if they were threatened by protesters.

Describing Wednesday's events, the bulletin said: "Security police force members retreated from the first security line to the second security line and again requested the mob to disperse peacefully without violence but the protesting group didn't follow the request." The broadcast also chided the British Broadcasting Corporation and the Voice of America for transmitting what it called a "skyfull of lies."

Dissident groups and media reported up to eight dead.

The military junta's announcement on state radio and television was the first acknowledgment that force has been used to suppress the protests and its first admission that blood had been shed after a month of mostly peaceful demonstrations.