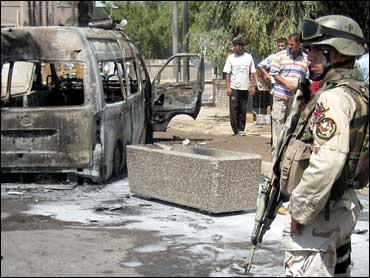 Nine U.S. soldiers died in Iraq, the military said Monday, including seven in a vehicle accident during a prisoner transport in Baghdad, the U.S. command said. Two of the prisoners also died.

The military said it did not immediately have further details.

Another soldier was killed and two more were injured east of Baghdad in a non-combat incident when their vehicle overturned and caught fire, according to a separate statement.

The cause of both accidents are under investigation, the military said.

A Task Force Lightning soldier also died from injuries sustained during an attack Sunday in northern Iraq, the U.S. command said. The soldier's patrol came under rocket fire in the Kirkuk area.

Meanwhile, Prime Minister Nouri al-Maliki told lawmakers Monday that Iraqi forces were not ready to take over security from the U.S. military across the country.

"There have been tangible improvements in security in the recent period in Baghdad and the provinces but it is not enough," he told parliament. "Despite the security improvement, we still need more efforts and time in order for our armed forces to be able to take over security in all Iraqi provinces from the multinational forces that helped us in a great way in fighting terrorism and outlaws."

Al-Maliki made the comment hours before the U.S. ambassador to Iraq, Ryan Crocker, and top U.S. commander Gen. David Petraeus were to appear in the U.S. Congress to deliver reports on Iraq's progress amid a debate over calls to start bringing American troops home.

The two Americans were widely expected to maintain that this year's troop buildup has reduced violent attacks in Baghdad and argue for more time to restore security.

Al-Maliki said that violence had dropped 75 percent in the Baghdad area since the U.S. began pouring in additional troops at the start of the year. He gave no figures.

"The key to reconstruction, economic development and improving peoples' standard of living is security," he said.

Still, attacks in the capital have picked up in recent days in the run-up to the report and as the Muslim holy month of Ramadan nears, a time when violence usually spikes higher.

CBS News chief foreign correspondent Lara Logan reports that most Iraqi citizens seem to disagree with the positive assessments of the troop surge.

"You only have to look at the number of Iraqis trying to flee the country every day to know they don't feel safer," Logan said on CBS' Early Show. "They don't believe any gains being made in security are enduring."

Evidence of Iraqi citizens' lack of confidence in improvements heralded by the U.S. military was also reported Monday by the British Broadcasting Corporation.

A poll of about 2,000 ordinary Iraqis by the BBC, in conjunction with ABC News and Japan's NHK, found that 70 percent believe security in the area covered by the troop surge has deteriorated in the last six months.

Sixty-percent of those polled also said attacks on U.S. troops in Iraq were justified.

Amid the violence, Al-Maliki was called before parliament to give his own assessment of the security situation in Iraq. Despite intense U.S. pressure to move ahead with 18 benchmark laws - including one that will allow for the reintegration of members of Saddam Hussein's Baath party into political life and another on oil revenue sharing - none have yet been taken up by parliament for discussion.

The so-called de-Baathification draft law was finally presented by al-Maliki's Cabinet to parliament on Monday, and the legislature scheduled discussion to begin on it next week, said Wissam al-Zubaidi, an adviser to deputy parliament speaker Khaled al-Attiyah.

Though his government has been widely criticized for failing to bridge sectarian divides, al-Maliki insisted that progress had been made.

"We have achieved success in preventing Iraq from going into sectarian war and I am fully confident that national reconciliation is our only way that takes Iraq into safety," al-Maliki said.

Logan reports that the some of Iraq's military commanders are trying hard to make security advances, but say they're getting sectarian-biased orders from above.

The lack of political reconciliation cannot be blamed squarely on the present leadership, says Logan. "These problems existed before, it's impossible to just blame the al-Maliki government."

Logan says there is no real sign from any of the leaders of Iraq's warring militias that they're willing to reconcile their differences and seek peace.

In the U.S. raid on Sadr City, troops came under fire while moving into the search area and as they departed and fired back, Bleichwehl said.

Al-Sadr late last month declared a "freeze" on his Mahdi Army's activities so that the militia could regroup, but the U.S. has said breakaway factions over which al-Sadr has no control have continued to fight.

"Coalition forces returned proportional and precise fire on the enemy while being engaged..." Bleichwehl said in an e-mailed response to questions. "The unit sustained no casualties and there are no reports of civilian casualties."

But residents showed Associated Press Television News the coffins of the people they said were killed in the raid - a woman and her two daughters. Residents lifted the blanket from inside one of the simple wood coffins to show the bodies of two little girls lying next to each other.

A police officer, speaking on condition of anonymity for security reasons, confirmed the woman and two girls were killed in the firefight.

"Neither the government protects us nor does Bush defend us," lamented resident Abu Ali. "What shall we do?"