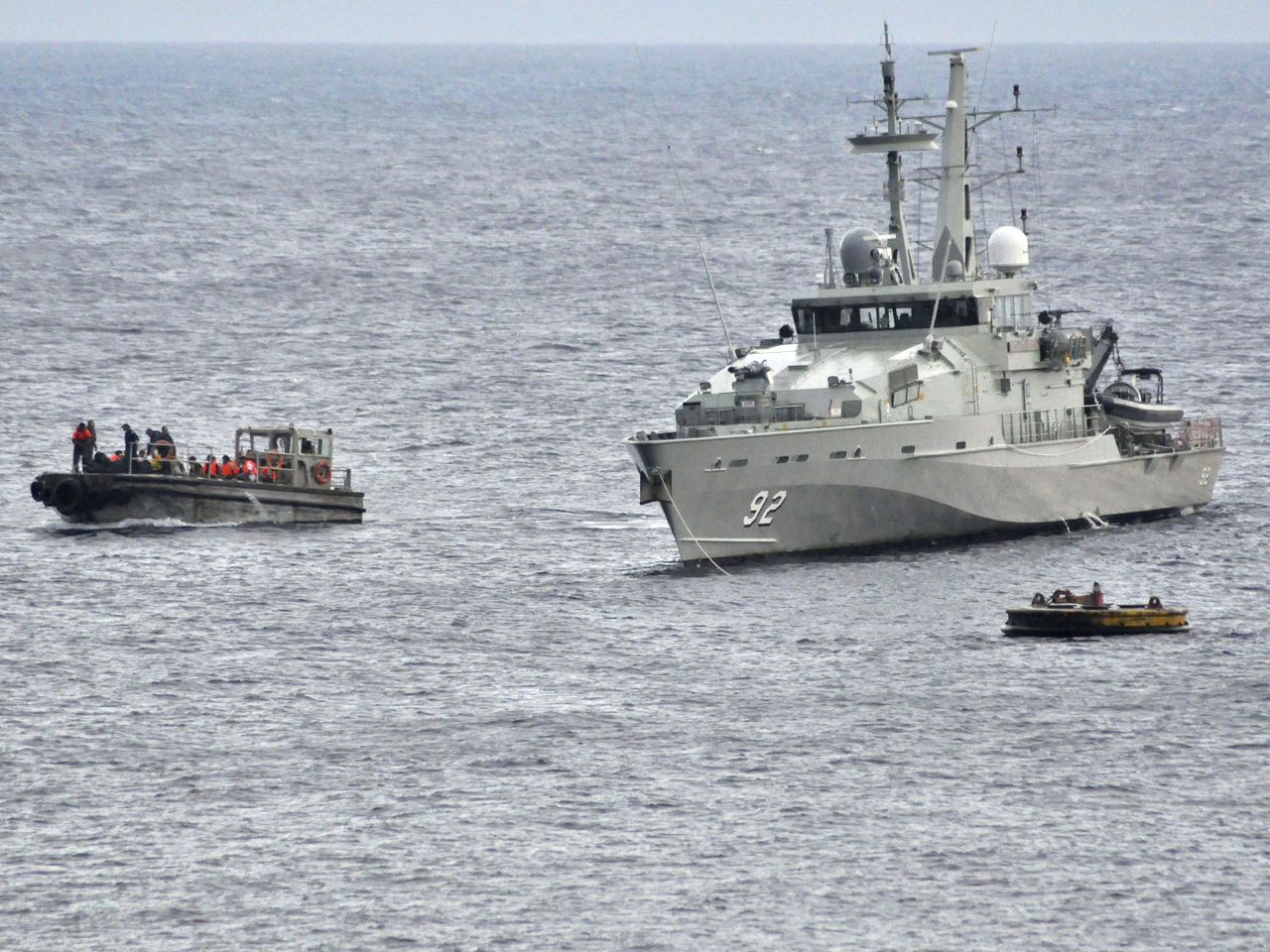 An Australian navy patrol boat and three cargo ships had rescued 110 survivors — including a 13-year-old boy — by late Thursday and delivered them to the Australian territory of Christmas Island 120 miles to the south early Friday, Meehan said. Three bodies also were recovered.

"The vast majority of the survivors are healthy and won't need medical attention," Meehan said. It wasn't clear where the passengers were from, but most asylum seekers trying to reach Australia are fleeing violence and poverty in nations such as Afghanistan, Iraq, Iran or Sri Lanka.

Home Affairs Minister Jason Clare said while seas were rough, people could have survived if they had life jackets or were clinging to debris as most survivors had done.

"There is the prospect that there are people out there still alive," he told reporters.

He said about 40 survivors had been found clinging to the upturned hull on Thursday afternoon, while others were discovered clinging to debris up to 4 miles from the scene.

Clare said the boat had initially called Australian rescue authorities late Tuesday to report being "in distress," but gave no location. The crew called back early Wednesday and reported the boat's position 44 miles south of the main Indonesian island of Java. Australian authorities advised the crew to return to Indonesia and reported their situation to their Indonesian counterparts, who had rescue responsibility for the area, he said.

"Nevertheless, at Christmas Island Border Protection Command began to preposition vessels to respond if an urgent request for assistance was requested," Clare said.

A surveillance plane crew found the boat capsized on Thursday afternoon halfway between Christmas Island and Java, still within Indonesia's zone of search and rescue responsibility.

He said the boat had made several calls Thursday morning that "raised concerns about the safety of the vessel," but he did not have details of those calls.

Speaking of Australian rescue authorities' response, Clare said that "it looks like they took proactive steps."

"All of the advice I have is that the work between Australian agencies and Indonesian agencies was very good," he added.

Christmas Island, in the Indian Ocean, is closer to Indonesia than to the Australian mainland. It is a popular target for a growing number of asylum seekers who attempt to reach Australia on overcrowded fishing boats from Indonesia — sometimes with deadly consequences.

Western Australian police were being sent to Christmas Island to attempt to identify bodies.

Australian Prime Minister Julia Gillard, who is seeking ways to stem the flow of asylum seekers to Australia, discussed the apparent tragedy with Indonesian President Susilo Bambang Yudhoyono in Brazil, where they are both attending a U.N. environment summit.

"At this stage, details are sketchy but what is apparent is there has been a large loss of life at sea," she said. "This is a very distressing and tragic incident."

In December 2010, an estimated 48 people died when an asylum seeker boat broke up against Christmas Island's rocky coast.

Last December, about 200 asylum seekers were feared drowned after their overcrowded ship sank off Indonesia's main island of Java.