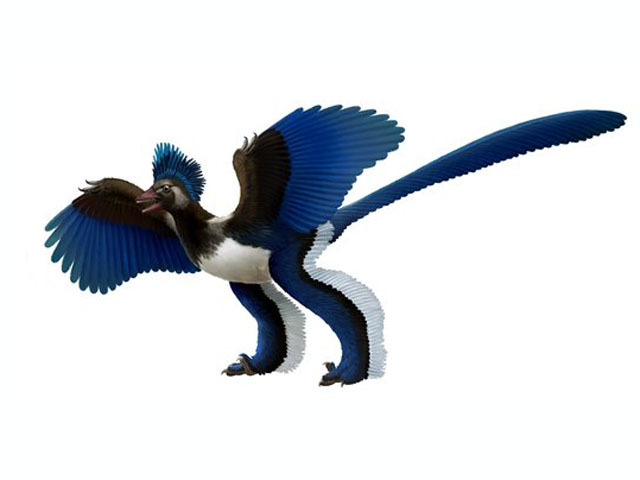 NEW YORK - One of the world's most famous fossil creatures, widely considered the earliest known bird, is getting a rude present on the 150th birthday of its discovery: A new analysis suggests it isn't a bird at all.

Chinese scientists are proposing a change to the evolutionary family tree that boots Archaeopteryx off the "bird" branch and onto a closely related branch of birdlike dinosaurs.

Archaeopteryx (ahr-kee-AHP'-teh-rihx) was a crow-sized creature that lived about 150 million years ago. It had wings and feathers, but also quite un-birdlike traits like teeth and a bony tail.

Discovered in 1861 in Germany, two years after Charles Darwin published "On the Origin of Species," it quickly became an icon for evolution and has remained popular since.

The Chinese scientists acknowledge they have only weak evidence to support their proposal, which hinges on including a newly recognized dinosaur.

Other experts say the change could easily be reversed by further discoveries. And while it might shake scientific understanding within the bird lineage, they said, it doesn't make much difference for some other evolutionary questions.

Archaeopteryx dwells in a section of the family tree that's been reshuffled repeatedly over the past 15 or 20 years and still remains murky. It contains the small, two-legged dinosaurs that took the first steps toward flight. Fossil discoveries have blurred the distinction between dinosaurlike birds and birdlike dinosaurs, with traits such as feathers and wishbones no longer seen as reliable guides.

"Birds have been so embedded within this group of small dinosaurs ... it's very difficult to tell who is who," said Lawrence Witmer of Ohio University, who studies early bird evolution but didn't participate in the new study.

The proposed reclassification of Archaeopteryx wouldn't change the idea that birds arose from this part of the tree, he said, but it could make scientists reevaluate what they think about evolution within the bird lineage itself.

"Much of what we've known about the early evolution of birds has in a sense been filtered through Archaeopteryx," Witmer said. "Archaeopteryx has been the touchstone... (Now) the centerpiece for many of those hypotheses may or may not be part of that lineage."

The new analysis is presented in Thursday's issue of the journal Nature by Xing Xu of the Chinese Academy of Sciences in Beijing, and colleagues. They compared 384 specific anatomical traits of 89 species to figure out how the animals were related. The result was a tree that grouped Archaeopteryx with deinonychosaurs, two-legged meat-eaters that are evolutionary cousins to birds.

But that result appeared only when the analysis included a previously unknown dinosaur that's similar to Archaeopteryx, which the researchers dubbed Xiaotingia zhengi. It was about the size of a chicken when it lived some 160 million years ago in the Liaoning province of China, home to many feathered dinosaurs and early birds.

Julia Clarke of the University of Texas at Austin, who did not participate in the study, said the reclassification appeared to be justified by the current data. But she emphasized the study dealt with a poorly understood section of the evolutionary tree, and that more fossil discoveries could very well shift Archaeopteryx back to the "bird" branch.

Anyway, moving it "a couple of branches" isn't a huge change, and whether it's considered a bird or not is mostly a semantic issue that doesn't greatly affect larger questions about the origin of flight, she said.

Luis Chiappe, an expert in early bird evolution at the Natural History Museum of Los Angeles County who wasn't part of the new study, said he doesn't think the evidence is very solid.

"I feel this needs to be reassessed by other people, and I'm sure it will be," he said.